Physics of the Future: How Science Will Shape Human Destiny and Our Daily Lives by the Year 2100

Michio Kaku is the rare individual who is both a top-flight scientist (he is a theoretical physicist who has done pathbreaking work in string theory) and a successful popularizer of science and technology. His new book, Physics of the Future, although not on par with his best effort, Hyperspace, is thoroughly enjoyable and definitely worth reading. 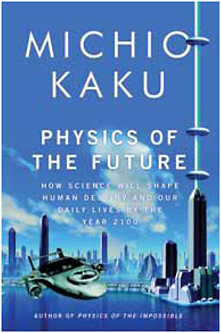 Physics of the Future explores what humanity can expect to occur during three time frames: the present to 2030, 2030 to 2070, and 2070 to 2100, in the fields of computing and artificial intelligence, medicine, nanotechnology, energy, and space travel. His predictions will not be stunning to those familiar with many of the scientific and technological issues raised in the book and certainly not to specialists in those areas. Nonetheless, he writes about complex matters in an easy and accessible style. The educated public will find the book highly engaging.

Any forecast 100 years into the future is inevitably going to have some predictions that seem farfetched. Examples here include the construction of space elevators (enormous structures using special ultra–high-strength materials that would extend from Earth’s surface to a distance several thousand miles into space and be used for transportation) and the beginning of terraforming projects on Mars (the creation of Earth-like conditions using genetic engineering and other technologies to transform the planetary surface) before the end of this century. Much more plausible are Kaku’s predictions of permanent lunar bases, the development of advanced propulsion systems, and human voyages to Mars. His description of nanoscale automatedspace probes—molecular-sized spacecraft that could be deployed in very large numbers and offer an extremely cost-effective way of exploring large areas of our immediate galactic neighborhood—is fascinating.

In the area of medicine, Kaku mixes the plausible and the ethically troublesome. These include almost fully computerized visits to physicians’ offices, medical treatments based on precise analysis of one’s genetic makeup, the ability to grow human organs, designer children, and most alarming, human cloning. Although he argues that cloning would be an achievement equal to that of the creation of artificial intelligence (AI), he states that clones will “represent only a tiny fraction of the human race and the social consequences will be small.” This is truly a breathtaking assertion.

For the most part, however, Kaku, a technological optimist, makes clear that he understands that technology can be used for dark as well as for good purposes. For example, he cites how the development of sonograms has led to dramatic increases in abortions, primarily of female fetuses, in certain developing countries. More of this would have improved the book. He would have done readers a service by discussing, for example, the potential implications of new health care technologies on health care costs, given that the life-extension technologies he discusses could radically extend the human life span. Indeed, throughout the book, he tends to downplay the fact that advances of the magnitude he is predicting will probably require major public investments. The political will to make these commitments seems notably absent today.

A chapter on nanotechnology covers topics ranging from the highly probable, such as the development of nanoscale diagnostic devices for use in medicine, to the more speculative use of this technology in developing quantum computers. Other possibilities, more akin to science fiction, include the creation of replicator devices à la Star Trek. Kaku also discusses the development of shapeshifting capabilities, which would seem to be one of the more implausible future wonders. Yet significant research on this subject has already been done. It may actually be possible to program various kinds of material so that they respond to changing electrical charges, leading to a rearrangement of the material into dramatically different shapes.

More generally, Kaku’s effort would have benefited from a more nuanced analysis of the possibilities for some of the technologies. Although some, perhaps many, will probably to come to fruition, others will not see the light of day.

Some projections made in Physics of the Future are fairly prosaic. For example, continued gains in computing power are prophesied, courtesy of Moore’s Law, although Kaku recognizes the fundamental physical limits to continued gains in computing power. He thinks that by 2020, Moore’s Law will run out of gas for current semiconductors, although he is relatively confident that new technologies, including carbon nanotubes, will replace them. Assuming that some successor to standard chip technology is found and computing power continues to advance, the possibilities for the future are tantalizing, with virtual reality beginning to compete in a serious way with traditional physical reality.

Even without the technological breakthroughs that would allow the continuation of Moore’s Law, the ability to access the Internet anywhere at any time through, for example, contact lenses or computers built into clothing, is not that many years away. Kaku sees a time before the end of the century when humans, interfacing with machines at a distance through computers capable of understanding human thought patterns, can lift objects through mental commands.

No book about the future of technology would be complete without a discussion of AI. Like futurists such as Ray Kurzweil, Kaku sees the steady development of machines beyond their mere computational capacity to the point, late in this century, when machines become self-aware. Kaku sees this advance, which in certain respects would be the most important achievement in human history, as being substantially more difficult and time-consuming than do Kurzweil and others, who believe that true AI is probable before 2050. Whoever is correct—and there are those such as the eminent Roger Penrose who believe true that AI is not possible—the policy and ethical concerns associated with this breakthrough will be legion. Unfortunately, Kaku only begins to scratch the surface of the implications for society posed by self-aware, superintelligent machines.

The technological future that Michio Kaku sees will require energy, and plenty of it. Moreover, the future he envisions will require that energy be generated in ways that minimize humanity’s carbon footprint. He believes this will be possible eventually through the successful development and deployment of nuclear fusion and other technologies, while in the shorter run the further development of existing technologies, such as electric cars, wind, and solar, will help bridge the gap to the future. His analysis of nuclear fission is prescient, given the recent disaster at the Fukushima nuclear plant in Japan; he has serious questions about the dangers of meltdown and the never-solved issue of nuclear waste disposal. Nonetheless, it is seems clear that despite Kaku’s doubts about the viability of nuclear fission, many countries will continue their drive toward increasing reliance on this technology, as oil and coal become more expensive during the next several decades.

Kaku thinks the successful transition to a low-carbon future is critical; he takes the threat of global warming very seriously and entertains several ideas that would at least supplement the drive toward noncarbon energy sources. These include geoengineering solutions and technologies, including the genetic engineering of plants and trees that could absorb larger amounts of carbon dioxide. Many readers will probably balk at some of these possibilities, but Kaku argues that as the cost of global warming becomes more evident, future society will be willing to consider an array of possibilities that are considered to be too far outside the box today.

Some readers will also have doubts about Kaku’s hopes regarding the ability to deploy commercially viable nuclear fusion sometime between 2050 and 2070, given the numerous false starts we have seen over the years. And his tempered optimism regarding the short-run viability of solar energy will surely be disputed by many. If renewable sources fail to do the job and if society decides to reduce carbon-based fuels over the next few decades, we may need to swallow hard and accept the reality of a long-term presence of nuclear fission as a key energy source.

Social scientists will be particularly attracted to the final chapters. Although Kaku’s optimism is evident throughout the book, that optimism is tempered by the daunting tasks facing the United States and and the rest of humanity. He speaks movingly about the U.S. education system: “The United States will eventually have to overhaul its archaic, sclerotic education system. At present, poorly prepared high school students flood the job market and universities, creating a logjam … and the universities are burdened by having to create new layers of remedial courses to compensate for the poor high school education system.”

Nonetheless, it is not evident from reading Physics of the Future that the author is fully cognizant of the extent of the problems facing the country. Of particular concern is an increasing lack of understanding of and even hostility in U.S. society toward science and its practitioners. It may be that some of the difficulties science has in communicating with the mass public involve the sense that science and the technologies it creates operate in a moral and ethical vacuum. Kaku, although very good at developing interesting scenarios about various future developments, may not fully appreciate the challenges that lie ahead in building an adequate foundation of support among the public.

The advances Kaku envisions will not occur automatically; the future is still to be written. Without support from both elites and the public, the future may not be nearly as bright as portrayed by the author. And if there is to be a future anything like that described by Kaku, it may be one in which the United States will play a far less prominent role in scientific and technological advances than it has during the past century. In short, if the scientific and technological wonders envisioned in Physics of the Future are to come about, it will in substantial part depend on the actions taken in the next decade to address profound deficiencies in our culture, economy, and educational system.

Notwithstanding these caveats, Physics of the Future is highly recommended. Kaku’s vision of our technological future and its implications are an important contribution that will appeal to a wide-ranging audience.