Win-Win Ecology: How the Earth's Species Can Survive in the Midst Of Human Enterprise 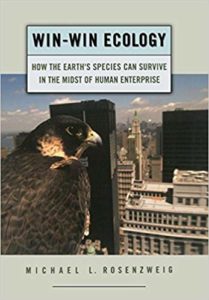 In these days of unremittingly bad news about Earth’s environment–in particular the state of its ecosystems and species–what a pleasant prospect to encounter a book with the title Win-Win Ecology. As one of those who have added to the litany of books and articles (and even a permanent museum installation) devoted to the causes and consequences of the mounting carnage of ecosystem degradation and species loss, I couldn’t help but feel a ray of hope even before cracking open Win-Win Ecology. And if I came away not as fully buoyed with renewed confidence as I might have wished, I did find plenty of food for thought and some bold and insightful messages about what we can realistically expect to do to cope with what would be, in the coming decades, the sixth mass extinction to engulf Earth in the past half-billion years.

Coping is the right word to describe Michael Rosenzweig’s message here. A well-known and respected ecologist at the University of Arizona, Rosenzweig wants us all to become a little more realistic about what we have done and continue to do in transforming the surface of the planet. (He says that we have altered 95 percent of Earth’s surface so far, which is more than I would have liked to hear.) Humans have to cope with the realities of what has already happened and will likely continue. We especially have to get used to the idea that extinction has happened in the past, is certainly happening now, and will inevitably continue no matter what we do and hope. The best we can do is to slow the extinction rate, letting those species that cannot adjust to the presence of 6 billion-plus humans go to their inevitable doom, while helping the survivors to go on.

But according to Rosenzweig, it is not just we humans who must cope; Earth’s species must also learn to get along with us. He says there are two kinds of species: those that can’t stand our presence and those that can either coexist with us or, with a little help, learn to coexist with us. Nature, he points out, is incredibly resilient. The explosion of black bear, white-tailed deer, and coyotes in suburban and even urban areas shows that some species driven back by the initial onslaught of human contact can indeed adjust their behavior to the realities of human presence. Rosenzweig is by no means proposing a new baseline definition of biodiversity that would include just starlings, house sparrows, Norway rats, and other species that thrive in human-dominated environments. He has in mind something a bit more ambitious and encompassing.

Key to what Rosenzweig calls reconciliation ecology is conscious human management of the environment. He contrasts his ideas with what he presents–somewhat unfairly–as two earlier, inadequate (if not wholly outmoded) cornerstones of conservation biology: reservation and restoration ecology. Rosenzweig argues that reservation ecology, which seeks to wall off putatively pristine tracts from human use, is unrealistic because truly pristine habitats no longer exist and because it is intended to preclude human management. But this is a bit disingenuous. After all, the act of walling off something is a thoroughly human action, however unrealistic and doomed to failure it might be.

Somewhat more realistic in his view, restoration ecology seeks to revert degraded ecosystems to their original state; its realism deriving mostly from the overt, conscious involvement of human beings rather than from any hope of recapturing the halcyon days before the human onslaught. But best of all, in Rosenzweig’s eyes, is the science of inventing, establishing, and maintaining new habitats to conserve species diversity in places where people live, work, or play. This is his definition of reconciliation ecology.

I cannot think of any prominent conservationist (scientist or impassioned layperson) who would any longer disagree with the idea that to be successful in the long run, any conservation effort simply must fold in the economic realities of the people actually living in or on the periphery of the real estate in question. And every serious conservation effort I’ve encountered since the mid-1980s (in Africa, Madagascar, and South America, as well as the United States) has taken as a given the need for human management of land that still has some biodiversity worth trying to save.

Indeed, with increasing frequency, wild species and humans are encouraged to tolerate one another. The Huab Valley in northwestern Namibia boasts a number of “reserves” owned by indigenous peoples who live in small farming communities. They have a traditional antipathy toward marauders, such as elephants, who eat and trample their vegetables and fruits, and lions and leopards, who prey on their cattle and goats. The task has become to convince the people owning these lands to tolerate a bit of marauding in exchange for the economic rewards of ownership, not just of fenced-in bits and pieces of land but of the whole domain, including its remnant populations of wild animals and plants.

This coexistence made it possible for me one recent morning to track on foot a mother rhino and her two-month-old calf and to enjoy a herd of desert elephants climbing a small mountain. The occasional human dwelling came into view, but that was, after all, part of the deal. One settlement had a small medical facility, a school, and other amenities of modern life that were paid for in part through an arrangement between the inhabitants and ecotourism providers.

Rosenzweig thinks this is the type of thing we should be doing. But his triad of reservation, restoration, and reconciliation ecology, although perhaps a didactically useful distinction in the conservation biology classroom, is already outmoded in describing the current complex world of conservation theory and practice. The necessity of integrating human economic needs with conservation has become blindingly obvious to everyone who cares about stemming the tide of species extinctions. Rosenzweig, because of his discussion about the failures of reservation and restoration ecology, is worried that he will be labeled anticonservation. He needn’t be. The world has already moved on.

Getting the science right

I also was a bit disappointed in Rosenzweig’s discussion of why diversity in any given-sized region stays more or less in equilibrium. Diversity, he tells us, is a balance between the rate of production of new species (speciation) and the extinction of species. Fair enough. But he says that speciation and extinction are linked because they are feedback processes: The more species there are, the greater the risk of extinction. But research in paleobiology in recent years has shown that there is a much tighter causal connection between extinction and evolution. Sandwiched between ecological disruption and recovery on the local scale, and the rare but powerful pulses of mass extinction followed by evolution on the grand scale, lies an entire category of events that I take to be the true guts of the evolution of life: Every once in a while, climate change or another form of physical disturbance overwhelms entire regions; regions large enough to encompass the entire geographic ranges of species. A threshold is reached, and the extinction of many species belonging to the many different lineages in the region occurs nearly simultaneously. This is accompanied, or followed shortly thereafter, by bursts of speciation among the survivors. Speciation seems almost contingent on extinction in such events, and in any case there is substantial evidence that the two processes are linked far more closely in dynamical terms than the vague feedback relationship that Rosenzweig describes.

But one must wait until the second part of the book to encounter the science in any depth. Intriguingly, Rosenzweig spends most of the book’s first half recounting story after story of deliberate and inadvertent examples of reconciliation ecology: an underwater restaurant in Israel, a power-plant haven for endangered American crocodiles, and the inadvertent-turned-deliberate value of a military base for saving an increasingly rare and endangered species of woodpecker. Often charming and engagingly told, Rosenzweig’s anecdotes take us around the globe while gently making his points about how we are to wrestle with the difficult problem of saving what is left of the living world.

Rosenzweig ends Win-Win Ecology with an eclectic excursion into the policy issues involved in implementing reconciliation ecology. He is against most governmental regulation that might support such efforts, for reasons that seem to reflect his personal political tastes more than any cogent argument. I find that odd, because conservation is quintessentially a social, not a scientific problem. We are collectively nations of laws, and however cumbersome and intrusive the legislative and overseeing judicial apparatus may in fact be, this is the general way in which conflicts of interest are resolved. Although underwater seafood restaurants and similar endeavors are striking examples of reconciliation ecology, they cannot provide the entire answer. The collective conservation effort needs all the help it can get.