The Working Poor: Invisible in America

The kind of poverty that’s hardest to shake is overdetermined. Dropping out of high school leads to the lowest-paid and least secure jobs, which can mean frequent stints of unemployment, which can unravel family finances and end health insurance coverage, strain relationships, and perpetuate poverty’s grip. Scramble the order of these chain links—or substitute mental illness or physical disability, an ill-timed divorce or disease, a criminal record, addiction, domestic violence, or teen pregnancy—and the results look much the same. 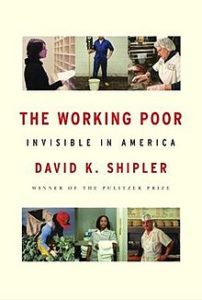 Social scientists can document the multiple causes of poverty, calculate its social and personal costs, spot trends that public policymakers need to address, and assess remedial programs. But researchers’ business isn’t telling the unique (if sadly familiar) stories of why particular people are poor and so often stay that way. That takes a gifted chronicler like Pulitzer Prize-winning journalist David K. Shipler, whose The Working Poor: Invisible in America makes those stuck in poverty harder than even the most startling statistics for politicians and taxpayers to forget.

Shipler claims that making headway against poverty’s tangled roots requires transcending partisan politics, and he aims to make both “devout conservatives and impassioned liberals” squirm. Unsentimental, he describes the demoralizing obstacles that economically marginal workers face, often stoically, but also the bad judgment calls that many make in navigating the workplace and family life. Fair, he depicts the exhausting treadmill of low-paid work, but he also interviews job trainers who are forced to remind trainees to bathe, employers stiffed after cosigning loans for workers, and teachers threatened with body blows when confronting parents who let their kids skip school. Thus, we meet Tom, a grieving widower who works ungodly hours to support his kids and takes an ethical stand at work that costs him his job, but goes on drinking jags and lets his son’s shot at college slip away. Or Wendy, a victim of childhood sexual abuse who moves from foster home to foster home, job to job, and man to man, until she marries a father for her palsy-stricken baby, only to find herself trapped again in an abusive relationship and forced again to leave.

These and a dozen others in The Working Poor are life stories—not just drive-by journalism. Shipler tails his protagonists for many years, interviewing some 20 times or more. Complementing more objective and broad-based scholarly research, deep reporting like his leaves an indelible impression of how precarious a hand-to-mouth existence can be and how each generation’s disadvantages and mistakes color the prospects of the next. But Shipler also weaves these chronicles into a more structured examination of failed schools, homelessness, violence and abuse, chronic illness, family dysfunction, and, most of all, low-paying dead-end jobs.

Since the landmark welfare reforms of 1996, work has been both the touchstone and the crucible of public policy toward the poor. Entry-level jobs, Democrats and Republicans agreed, were to deliver the poor from welfare dependency and shrink the welfare rolls, and states channeled welfare funds into job training and work supports such as child care and transportation subsidies.

Welfare caseloads did fall, but are newly working parents and their children better off once they cut the cord of cash assistance? And what are low-wage workers who never received welfare getting for toiling without the full range of supports available to former welfare recipients? If the measures are economic security and upward mobility, Shipler passes a painful verdict that substantial research backs up. Those in the lowest-paid jobs, where most migrant workers and welfare recipients land, are less likely than other workers to get employer-paid health insurance and other benefits. Increasingly, career mobility, even on the employment ladder’s bottom rungs, is tied less to on-the-job experience than to higher education, which most low-paid workers lack. Meanwhile, research also shows, real wages for those with a high-school diploma or less are lower than they were 30 years ago.

Shipler comes to public policy inductively, asking what the working poor need, not what government or the private sector can do best or whether the programs he touts as models could be replicated widely or affordably. Excusing himself because his last book (A Country of Strangers: Blacks and Whites in America, 1997) was on race, he says too little about its role in perpetuating poverty. And he doesn’t ask what, besides altruism, might motivate Americans to revive egalitarianism. But if Shipler’s vision is limited and he leaves the heavy analytical lifting to others, his eyewitness view of the poverty trap does lead him to some of the same general conclusions that many wonkier observers have reached.

Shipler joins the expert consensus that antipoverty policies have to cover all the bases. Alone, not even living-wage jobs are enough. He calls on government to boost the minimum wage (perhaps allowing regional differences), expand Head Start and the Earned Income Tax Credit, fund job-training programs and apprenticeships for low-skilled workers, and do more to get all who are eligible for food stamps and the State Children’s Health Insurance Program to use them. He also recommends dumping employer-based health insurance in favor of a federal single-payer system. As for education, the darkest corner in Shipler’s landscape of poverty, the author sees inequality persisting until school funding is decoupled from the local tax base.

If this sounds like a “big government” response to poverty, it is. But Shipler doesn’t believe that the poor should wait passively to inherit the earth. By showing up at the polls and voting their own interest, “those in or near poverty could,” he says, “hold the balance of power” in state and federal elections. He also thinks that the poor should take more responsibility for what happens within the family— including parenting and money management—just as government should shoulder more in the larger civic sphere. True to his promise to make everyone uncomfortable, Shipler urges liberals to fully acknowledge the role that dysfunctional families play in poverty and conservatives not to fixate on it to the exclusion of poverty’s many other drivers.

The Working Poor, as the author intends, does make the working poor and their plight more visible. Whether that knowledge makes us ashamed, as the author also intends, and whether collective guilt can be transformed into a political force practical, positive, and powerful enough to relax poverty’s stranglehold on millions of Americans remains to be seen. At least now, thanks partly to Shipler, we really know what it’s like.