Who should govern the Internet?

Networks and States: The Global Politics of Internet Governance

The phrase “Internet governance” stimulates a range of responses, from fear on the part of infotech pioneers to hope in the hearts of many government leaders in emerging economies. A global “network of networks,” the Internet interconnects networks that serve people in nations with widely varying political and social norms, and it can seem threatening to those uncomfortable with free and open communications. At the same time, its connection with economic development and creativity, with the “information society,” makes access to it important to all. Further complicating the situation is the historic role of the United States as a leader in developing, using, and hosting businesses that help to operate the Internet or related services. Other countries, especially in the developing world, have begun to look to the United Nations (UN) for alternative leadership, both because of its international character and because its one-country–one-vote processes can limit U.S. influence. These circumstances have made Internet governance a controversial topic since it emerged in the 1990s, and the publication of Networks and States is something of a milestone in its young history. 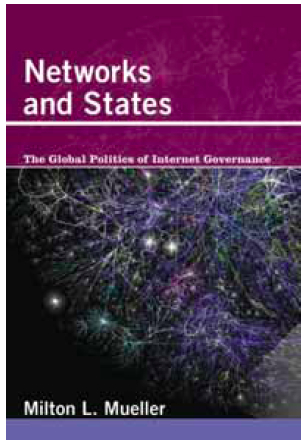 Milton Mueller could be considered the godfather of Internet governance studies. A professor at Syracuse University and the director of its Internet Governance Project, Mueller has cast a critical eye on many aspects of Internet development, beginning with the establishment in 1998 of the Internet Corporation for Assigned Names and Numbers (ICANN), which manages the assignment of domain names. Both ICANN’s U.S. connections and the nature of its processes (which have evolved with attempts to be more effective) have been a target for criticism from Mueller and others. Mueller has remained a keen observer and active participant in Internet discussions, and not surprisingly, his book blends analysis and opinion.

Networks and States is a primer on Internet governance, and it chronicles the evolution of key transnational institutions. Broader than his previous book, Ruling the Root, it benefits from his background in communications studies and his broad social science sensibilities. This perspective is a welcome contrast to the lawyer-dominated debates that characterize most discussions of cyber policy. Mueller draws broadly from the social science literature in his analysis of networks as an organizational form, arguing that “the future shape of Internet governance will be worked out via negotiation of governance problems attendant upon the rise of transnational networked forms of organization.”

Acknowledging that many of the issues he raises remain unresolved, Mueller catalogs ways in which the Internet puts pressure on states because of its global scope, the presence of new types of regulatory institutions, and the activism of the Internet community. He strives to explain how the range of activities now conducted via the Net make it necessary to consider numerous aspects of law, regulation, and public policy. The attempt is valuable, but the results are uneven.

Institutional frameworks are Mueller’s central concern, and he characterizes Internet governance as a gen-erator of institutional innovations that he regards as positive responses to the political pressure generated by the Internet. In saying that “cyberspace is indeed a place of its own,” Mueller keeps alive a belief held by early Net pundits that the system is so unique that it requires new policies, practices, and institutions. He argues that “Those who wish to govern the Internet . . . may be required to mirror its transnational, networked relations.” Mueller champions “multistakeholderism,” a form of governance that includes a wide range technical, business, government, and citizen groups in a transnational system.

Mueller is ideally positioned to describe the arc of evolution of the international institutions associated with Internet governance. He has been a close observer of the structures and processes associated with the UN and in particular the World Summit on the Information Society (WSIS) and its progeny: the Working Group on Internet Governance (WGIG) and the Internet Governance Forum (IGF). Authorized by the UN General Assembly in 2001 and featuring summits in 2003 in Geneva and 2005 in Tunis, WSIS responded, in particular, to concerns of developing countries about their ability to benefit from the Internet. One of the book’s strengths is its analysis of the meetings of these UN-derived entities and their ramifications. Mueller describes WSIS as organizing the field, illuminating the roles of technical management and public policy and of state and nonstate actors, and more. It catalyzed “a new transnational policy network around Internet governance,” helping to converge several smaller issue networks into a larger and broader one and providing a kind of connective tissue for transnational civil society. Mueller is candid about the limitations of WSIS, which generated much lofty language, such as the Geneva Declaration of Principles, but no binding agreements or major commitments of funds, but he nevertheless considers it a turning point for how people think about Internet governance. In particular, he credits WSIS with fostering the kind of holistic perspective on governance that animates this book and is consistent with Mueller’s own preferences for Internet governance.

In contrast to the thoughtful discussion of international political institutions, Networks and States fall short in two areas: the characterizations of the techies responsible for keeping the Internet functioning and of issues that can be aggregated under the heading of public safety. The result is to diminish his credibility as a broad commentator.

Mueller’s historic hard line as a critic of ICANN and the Domain Name System (DNS) management comes through in his pointed treatment of the technologists responsible for the design of the Internet protocols and other standardized elements that make the Internet work. These techies, whom Mueller describes as transnational and sovereignty-free in outlook and for whom the DNS is a matter of technology design, see its oversight by ICANN as technical coordination. After all, that is how the Internet grew and runs today. Mueller, with a focus on processes of decisionmaking and institution formation, dismisses as “myth” the view that such coordination is all that is needed.

Whereas Mueller’s obvious frustration with techies might be chalked up to a kind of culture clash, his treatment of public safety issues suggests a disturbing lack of grounding in the topics and a failure to differentiate between minor and major concerns. First, he tries to present Internet security concerns as an overreaction. Although many people would agree with him that the globalization of surveillance is problematic, those who have studied security would not agree with Mueller that protecting security is as simple as controlling spam and that what is needed is simply to apply the lessons of spam prevention. Mueller is also dismissive of child-protection efforts, paying only lip service to the severity of the problem and showing no recognition of how the Internet has aggravated child predation. Surprisingly for someone so supportive of nongovernmental organizations (NGOs), he attacks with only scant evidence the National Center for Missing and Exploited Children, an NGO that has been widely viewed as effective.

Mueller can come across as anti-American. To begin with, he almost blames Internet governance problems on the Internet’s U.S. origins, relatively rapid adoption within the United States, and impetus from U.S. telecommunications regulation: “The rise of an Internet centered in the United States was a disruptive event in the system of international relations formed around communication and information policy.” He is unrelenting in his criticism of ICANN as subject to U.S. manipulation, arguing that it has undermined both national governments and conventional intergovernmental organizations in the areas of communications and information policy and that the key legal instruments that frame its operations are “held together by a . . . sweeping U.S. assertion of policy authority over the Internet’s name and address roots.” He derides the recent reiteration by the U.S. government of its interests in and authority over ICANN as “unilateral globalism.”

Mueller’s approach can be described as utopian populism: “[I]f one puts individual rights first, as I believe we should, the scope and authority of sovereignty become subordinate to the human right to communicate.” And “[e]ven though the hegemony of one state could produce a globalization, a true transnationalist would reject that as a cyberimperialism that privileges one (national) polity and subjugates others.” Mueller remarks favorably on the rise of a “new social movement that challenges the prevailing narrative of intellectual property” and promotes open access to knowledge.

Internet governance remains a dynamic arena, and not surprisingly, recent developments make one wonder how Mueller might have addressed them. For example, he asserts boldly that, “To govern copyright and trademark in the digital world is to govern the Internet.” Although Networks and States focuses on battles over online intellectual property through the mid2000s, Mueller’s analysis anticipated 2011–2012 debates over legislation (known by their acronyms as SOPA and PIPA) nominally focused on intellectual property but criticized by providers and many users of Internet services as inimical to Internet operations more generally. In the same period, the Arab Spring displayed dissidents’ use of the Internet and the responses of repressive regimes attempting to control Internet access, raising the specter of Internet Balkanization. Such phenomena will intensify struggles over Internet governance and test the multi-stakeholderism that was forged through WSIS. As Mueller well describes, the IGF lacks teeth, and Internet governance may take some unexpected turns thanks to unfolding regional geopolitics. He may be right that “In Internet governance, any concession to states has profound consequences. . . . So if one accepts the principle of national sovereignty, one has no choice but to try to force the Internet to abide by all local taboos and regulations.” Current trends suggest that the global slider is moving away from transnationalism, where Mueller would prefer it to rest, toward nationalism. But if we have learned anything from the young Internet, it is that circumstances continue to evolve. Mueller has helped people to think about such challenges, but the theory of Internet governance seems too immature for it to yield reliable predictions.