Cloning Wildlife: Zoos, Captivity, and the Future of Endangered Animals 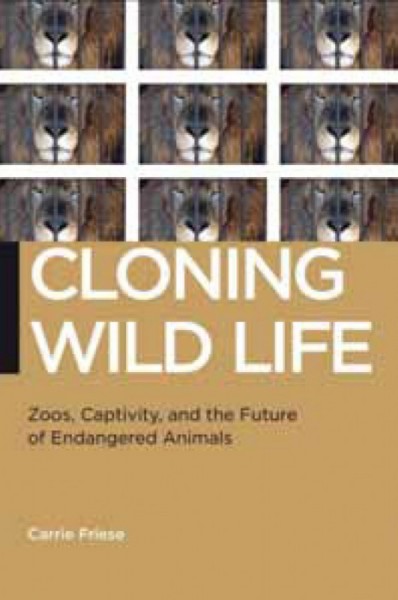 What a strange and useful book this is!

It looks like much ado about not much—just three experiments conducted at zoos on cross-species cloning (in banteng, gaur, and African wild-cat). Yet the much-ado is warranted, given the rapid arrival of biotech tools and techniques that may revolutionize conservation with the prospect of precisely targeted genetic rescue for endangered and even extinct species. Carrie Friese’s research was completed before “de-extinction” was declared plausible in 2013, but her analysis applies directly.

First, a note: readers of this review should be aware of two perspectives at work. Friese writes as a sociologist, so expect occasional sentences such as, “Cloned animals are not objects here…. They are ‘figures’ in [Donna] Haraway’s sense of the word, in that they embody ‘material-semiotic nodes or knots in which diverse bodies and meanings coshape one another.’” I write as a proponent of high-tech genetic rescue, being a co-founder of Revive & Restore, a small nonprofit pushing ahead with de-extinction for woolly mammoths and passenger pigeons and with genetic assistance for potentially inbred black-footed ferrets. I’m also the author of a book on ecopragmatism, called Whole Earth Discipline, that Friese quotes approvingly.

Friese is a sharp-eyed researcher. She begins by noting with interest that “in direct contradiction to public enthusiasm surrounding endangered animal cloning, many people in zoos have been rather ambivalent about such technological developments.” Dissecting ambivalence is her joy, I think, because she detects in it revealing indicators of deep debate and the hidden processes by which professions change their mind fundamentally, driven by technological innovation.

The innovation in this case concerns the ability, new in this century, of going beyond same-species cloning (such as with Dolly the sheep) to cross-species cloning. An egg from one species, such as a domestic cow, has its nucleus removed and replaced with the nucleus and nuclear DNA of an endangered species, such as the Javan banteng, a type of wild cow found in Southeast Asia. The egg is grown in vitro to an early-stage embryo and then implanted in the uterus of a cow. When all goes well (it sometimes doesn’t), the pregnancy goes to term, and a new Javan banteng is born. In the case of the banteng, its DNA was drawn from tissue cryopreserved 25 years earlier by San Diego’s Frozen Zoo, in the hope that it could help restore genetic variability to the remaining population of bantengs assumed to be suffering from progressive inbreeding. (At Revive & Restore we are doing something similar with black-footed ferret DNA from the Frozen Zoo.)

Now comes the ambivalence. The cloned “banteng” may have the nuclear DNA of a banteng, but its mitochondrial DNA (a lesser but still critical genetic component found outside of the nucleus and passed on only maternally) comes from the egg of a cow. Does that matter? It sure does to zoos, which see their task as maintaining genetically pure species. Zoos treat cloned males, which can pass along only nuclear DNA to future generations, as valuable “bridges” of pure banteng DNA to the banteng gene pool. But cloned female bantengs, with their baggage of cow mitochondrial DNA ready to be passed to their offspring, are deemed valueless hybrids.

Friese describes this view as “genetic essentialism.” It is a byproduct of the “conservation turn” that zoos took in the 1970s. In this shift, zoos replaced their old cages with immersion displays of a variety of animals looking somewhat as if they were in the wild, and they also took on a newly assumed role as repositories of wildlife gene pools to supplant or enrich, if necessary, populations that are threatened in the wild. (The conservation turn not only saved zoos; it pushed them to new levels of popularity. In the United States, 100 million people a year now visit zoos, wildlife parks, and aquariums.)

But in the 1980s some conservation biologists began moving away from focusing just on species to an expanded concern about whole ecosystems and thus about ecological function. They became somewhat relaxed about species purity. When peregrine falcons died out along the East Coast of the United States, conservationists replaced them with hybrid falcons from elsewhere, and the birds thrived. Inbred Florida panthers were saved with an infusion of DNA from Texas cougars. Coyotes, on their travels from west to east, have been picking up wolf genes, and the wolves have been hybridizing with dogs.

As the costs of DNA sequencing keep coming down, field biologists have been discovering that hybridization is rampant in nature and indeed may be one of the principle mechanisms of evolution, which is said to be speeding up in these turbulent decades. Friese notes that “as an institution, the zoo is particularly concerned with patrolling the boundaries between nature and culture.” Defending against cloned hybridization, they think, is defending nature from culture. But if hybridization is common in nature, then what?

Soon enough, zoos will be confronting the temptation of de-extincted woolly mammoths (and passenger pigeons, great auks, and Carolina parakeets, among others). Those thrilling animals could be huge draws, deeply educational, exemplars of new possibilities for conservation. They will also be, to a varying extent, genomic hybrids—mammoths that are partly Asian elephant, passenger pigeons that are partly band-tailed pigeon, great auks that are partly razorbill, Carolina parakeets that are partly sun parakeet. Should we applaud or turn away in dismay? I think that conservation biologists will look for one primary measure of success: Can the revived animals take up their old ecological role and manage on their own in the wild? If not, they are freaks. If they succeed, welcome back.

Friese has written a valuable chronicle of the interaction of wildlife conservation, zoos, and biotech in the first decade of this century. It is a story whose developments are likely to keep surprising us for at least the rest of this century, and she loves that. Her book ends: “Humans should learn to respond well to the surprises that cloned animals create.”

Stewart Brand ([email protected]) is the president of the Long Now Foundation in Sausalito, California.