The Gene Machine: How Genetic Technologies Are Changing the Way We Have Kids—and the Kids We Have 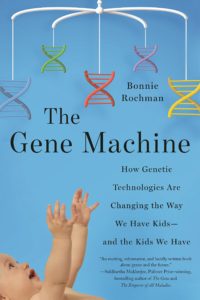 Because she has done justice to the morally challenging and politically explosive topic of the role of genetic testing in reproduction, the primary experience of reading Bonnie Rochman’s new book, The Gene Machine, is one of discomfort. If you want to consider the quest for “better” babies from wildly divergent, deeply personal points of view, there is probably no better book out there. Her excellent journalism skills are on full display here, and Rochman addresses head-on many of the most divisive issues in the field.

The central question of the book is how parents react to the onslaught of information they get when they do comprehensive genomic sequencing of their children. “Is genetic knowledge empowering or fear-inducing, or both?” Rochman asks. “Will it stress parents out or make them savvier?”

The Gene Machine is ultimately an ode to personal choice within the thicket of options coming our way. Unfortunately, Rochman avoids delving meaningfully into a discussion of how those choices can be formed or restricted. For example, economic realities may preclude emerging options for many women, and social norms about what kinds of children are desirable affect all of our imaginations. Particular communities can also face restrictions on their reproduction. For example, women who live in a state with very few abortion providers can lose the ability to make that choice; women who are pregnant in prison, who are struggling with addiction, or who receive welfare tend to experience greater policing and surveillance throughout their pregnancies. People familiar with these kinds of scenarios may be frustrated by the book’s minimal contextual discussion.

The book is at its best when exploring the personal and heart-wrenching stories of parents living with despair, fear, or regret from decisions they made or options they overlooked. Reading this book will certainly make you take a hard look at your own preferences and needs. As Rochman states, “This book is not about right or wrong answers, only extremely personal and intimate calculations.” However, she acknowledges, “The testing we elect and that which we forgo, and the choices we make based upon the results, has profound implications for what sort of society we want to be.”

Rochman focuses broadly on five subjects of genetic testing: members of couples prior to reproduction; embryos produced via in vitro fertilization; fetuses during pregnancy; newborns; and children with rare diseases. Each of these cases has slightly different ethical dimensions, but deals with many of the same themes: Can genetic sequencing impede someone’s right to an “open future”? Can it lead to stigma or discrimination if someone is labeled as having a particular trait or tendency? Should people be informed about incidental findings? And what do people need to know in order to make an informed choice?

Rochman is largely in favor of genetic testing in general, and preventative testing in particular. She discusses the San Francisco start-up Counsyl, which pushes for universal carrier screening as an attempt to prevent the transmission of diseases caused by single-gene mutations. As an example of the potential of that concept, she discusses the push within the Jewish community for prospective parents to test for Tay-Sachs disease. But, Rochman asks, wouldn’t it be better for everyone to know ahead of time, just in case?

She asserts that this knowledge would allow parents to be “in control,” but there is always a gamble. Prospective parents who learn they are at risk of a genetic disease may opt for in vitro fertilization combined with preimplantation genetic diagnosis, but this is often a long, expensive, and uncomfortable process that results in successful births only a portion of the time. Other alternatives, such as adoption or prenatal screening followed by the possibility of abortion, have their own hurdles. None of which is to say it is not better to know, but only to point out that the experience of control may be short-lived.

Genetic testing of fetuses during pregnancy opens up particularly sensitive issues, largely centered on the politics of abortion. To her credit, Rochman addresses this difficult topic head-on. She acknowledges nuances in the accuracy of tests for chromosomal abnormalities that might lead parents to choose to have an abortion, and the difficulties that this can cause. She notes that abortion services are becoming harder to access in some states. She addresses the decline in the number of babies born with Down syndrome, and a range of views about that fact from people who are intimately familiar with the condition. And she points out that with the barrage of testing coming our way in the near future, “A savvy consumer doesn’t automatically say yes.”

Nonetheless, she points out that parents use the Internet to try to understand and diagnose their children all the time. Parents meticulously track their babies’ sleeping and eating patterns; and pediatricians note a baby’s weight and height and compare them with population statistics. “We are accustomed in our tech-savvy world to accumulating data on our children,” Rochman states. Is genetic data any different?

In some ways, it’s not. For example, genetic data has all of the normal complications associated with other health data. These include security and privacy, which are hardly discussed in The Gene Machine, as well as issues relating to identity and the possibility of discrimination. Rochman makes the case that we should avoid genetic exceptionalism and learn what we can from other health fields that deal with sensitive information. But she is also uniquely interested in the bigger picture of what people do with their genetic information, and in the implications of having greater influence over the kids we have on the family-making process.

Rochman mentions the growing discussion of using new precision gene editing techniques, such as CRISPR, not merely to select a particular embryo during the in vitro fertilization process, but to modify one. However, Rochman also rightly points out that so-called designer babies already exist to a certain extent.

Anyone using a sperm or egg donor encounters menu-style choices about the kind of donor they want: hair color, eye color, weight, height, educational attainment, musical ability, and so on. The company GenePeeks will even “match” women’s DNA with that of men in a sperm bank in an attempt to prevent hundreds of possible diseases. These are arguably more precise methods of getting a child with a particular trait or propensity than genetic modification.

Moreover, the practice of preimplantation genetic diagnosis already puts parents in the position of being asked to choose one embryo over others. The basis of these decisions has sparked important debates in disability rights and justice communities. Should deaf parents be allowed to choose to have a deaf child? What does it mean to systematically assert that some conditions make life not worth living? Who decides and how do parents receive information about the range of possibilities? And finally, what should they do with that information?

This can become even more complicated when testing reveals a problem that is not well understood. Rochman shares the story of Maya Hewitt, who had genetic testing done for her son Daniel in an attempt to understand why he was experiencing hearing loss. The testing revealed that Daniel was missing a piece of his fifth chromosome, including a gene known as TERT. Mutations in that gene can lead to a host of complications including increased risk of cancer and bone marrow failure. However, there is scant evidence about Daniel’s case of simply missing the gene. Maya was told that Daniel might be affected, but that it couldn’t be predicted. This kind of inconclusive result might be the most challenging for parents to receive.

Maya Hewitt explains in the book, “Maybe I expect too much from science that they’re going to know what everything means. But our experience is that we are caught in a gray area—our report says ‘of unknown clinical significance.’ I wish we could stuff it back in the box and just live in ignorance. I wish I didn’t know.”

Based upon her extensive interviews with parents, Rochman suggests that there might be a useful distinction for thinking about genetic knowledge of existing children. She finds that for parents who perceive their child to be healthy, receiving negative or ambiguous information can be damaging. However, if they know their child is sick, they tend to want every snippet of information they can get. Rochman illustrates this point with the story of Shashi and David Goldstein’s daughter Cara, who was about to start chemotherapy just in case it helped her unknown condition. But hours before chemo was scheduled to begin, genetic sequencing results revealed that massive doses of a simple vitamin would be enough to prevent the deterioration of her body.

Rochman’s own preference is clear. A self-proclaimed “information junkie,” she opens the book with the famous Socrates quotation “The unexamined life is not worth living.” She is hardly alone. In a 2014 study of 514 new parents, 83% said they would want to have their baby’s genome sequenced. When there is an opportunity to know more, few of us seem able to resist.

In the final paragraph of the book, Rochman writes, “Technology is just a means to an end, a way to make—and keep—children healthy.” Although many parents may experience this to be true, it seems doubtful from a broader perspective. Technology is rarely just a means to an end, and not everyone necessarily envisions the same end point. Amidst the feel-good stories of how genetic sequencing is increasing biomedical knowledge, we should also pay attention to the insidious capability of technologies to not only provide a means but slowly and subtly shape the ends. Even with the relatively crude technologies at our disposal today, parents routinely use them to affect their children, and the kinds of children they have, beyond merely keeping them healthy. One needs only to peruse the traits considered desirable on an egg or sperm donor website to be reminded that there are forces at play that do not fit so comfortably within a medical framework. The question of how much and what kind of information we should know will never be straightforward, and for good reason.