The Pope of Physics: Enrico Fermi and the Birth of the Atomic Age

By Gino Segrè and Bettina Hoerlin 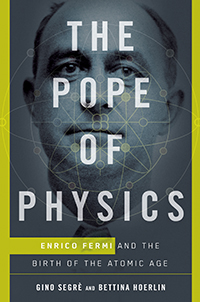 Enrico Fermi ranks among the twentieth century’s most famous physicists. He is known to the public for creating the world’s first nuclear reactor, and to fellow scientists for experiments revealing mysteries as diverse as the structure of the atom and the behavior of cosmic rays. He also worked out a way to predict when extraterrestrial creatures might arrive on Earth, devising a calculation method still used today for other elusive questions.

Students admired—even idolized—Fermi for his clear and eloquent lectures. Colleagues revered Fermi for the methodical way he first conceived, and then tested, his many scientific insights. Fermi was rare in his field for being creative both as a theoretical and as an experimental physicist. But he remains less well known as a personality or a public figure, unlike more famous peers such as Albert Einstein, J. Robert Oppenheimer, or Edward Teller. And yet he, as much as these better known figures, made crucial discoveries in modern physics.

Born in Rome in 1901, Enrico was the youngest of three children. His parents were upwardly mobile middle-class workers: his father was a manager on the state railway and his mother was an elementary school teacher. Their funds were limited, so to permit his mother to continue teaching, Enrico was sent to live with a wet nurse on a farm for his first years. He was shy and wary as a child, and emotionally private all his life. But the boy was also spunky, nicknamed Il piccolo fiammifero (“The little match”) for his fiery temper; his friends remembered his mischievous sense of humor and inventive practical jokes.

A diligent student with a photographic memory, Fermi’s brilliance and curiosity led him to teach himself physics, beginning as a teenager when he read a 900-page text published in 1840—in Latin. Also on his own, the young Fermi studied books and journals to learn quantum mechanics and general relativity. At age 17, his mathematical talents earned him entry to the prestigious Scuola Normale Superiore, in Pisa. There he excelled, and went on to become a professor of physics in Rome. In his late twenties, Fermi studied under Max Born at the University of Gottingen in Germany, in the company of three other future Nobel laureates: Werner Heisenberg, Wolfgang Pauli, and Paul Dirac. And while studying with Paul Ehrenfest in Leiden, Holland, he met Albert Einstein, who liked and admired Fermi.

Readers familiar with earlier books about Fermi will find little that’s new in Gino Segrè and Bettina Hoerlin’s recent biography, The Pope of Physics: Enrico Fermi and the Birth of the Atomic Age. For more details about the personal lives of Fermi and his family there is Atoms in the Family (1954), by his widow, Laura. Richer information about Fermi’s mastery of physics is in the classic Enrico Fermi, Physicist (1970) by his friend and colleague Emilio Segrè, a Nobel laureate and the uncle of Gino Segrè, the coauthor of the biography under consideration here. And for a true immersion in Fermi’s visionary scientific achievements, the University of Chicago published Enrico Fermi: Collected Papers. Also, the eclectic Fermi Remembered (2004), edited by Nobel laureate James W. Cronin, offers varied perspectives on his work from the centenary celebration of Fermi’s birth.

But what readers will find new and noteworthy in Segrè and Hoerlin’s book is the easy yet erudite way the authors bring Fermi and his work to life, in a crisp and authoritative style. The Pope of Physics brims with colorful details and instructive explanations, in a dramatic narrative that balances Fermi’s life and personality with his science. Segrè is an emeritus professor of physics and astronomy who has written about science and its practitioners. Hoerlin is a health policy administrator and college lecturer who grew up in Los Alamos, New Mexico, where the first atomic bombs were created and where her parents worked after fleeing Nazi Germany.

The authors are helpfully clear when explaining in lay terms not only the originality of Fermi’s scientific discoveries, but also how they fostered and fit into advances being made elsewhere. Fermi thrived when working with others, as he did during the Manhattan Project and earlier, at the University of Rome, with a team of physicists known as “the boys.” They called him “the Pope” because he was infallible, and “the Pope of Physics” endured as his nickname.

When holding a state professorship in Italy, Fermi became carefully apolitical as Mussolini’s fascism gripped the country. But if timid in society, he was bold in the way he studied science. In a 1932 article, Fermi applied statistical mechanics to his study of atomic physics, explaining quantum field theory in a mathematical and conceptual framework. (The Nobel laureates Hans Bethe and Richard Feynman later said this paper’s “enlightening simplicity” was pivotal for their own discoveries and careers.) With his penetrating insights and incremental experiments Fermi was able to show other physicists new ways to understand their own work. His research in Rome led Fermi to postulate, in 1934, a ß-decay theory to explain how electrons are emitted from atoms. He also demonstrated how atoms are transformed when he bombarded them with neutrons, and how slowing those neutrons increased their efficiency. This work earned Fermi the 1938 Nobel Prize in Physics.

This biography is rich with dramatic events, including Fermi’s chancy escape from fascist Italy. In the summer of 1938, Mussolini had begun an anti-Semitic campaign that endangered Fermi’s family because his wife was Jewish. That December, using the Nobel ceremony as their chance to travel abroad, the Fermis left Rome for Stockholm. Instead of returning to Italy after picking up the prize, they travelled to England before sailing to New York. There he had arranged a visiting professorship at Columbia University that soon became permanent. At Columbia, Fermi began collaborating with the Hungarian-born physicist Leo Szilard, and by July 1939 they had codesigned the world’s first nuclear reactor.

Fermi loved both the science and the social setting at Columbia. During several summers in the 1930s, he visited the California Institute of Technology and the University of Michigan, and enjoyed America’s informality and social freedoms. He was eager to become a citizen, bought a house in suburban New Jersey, and relished speaking in American slang. But once his adopted country was at war with Germany and in a race with Hitler to build the first A-bomb, Fermi’s team moved to the University of Chicago. In December 1942, at the Metallurgical Laboratory (“Met Lab”) that was part of the Manhattan Project, his team created the first self-sustaining nuclear chain reaction.

The Chicago reactor proved that chain reactions can perpetuate in uranium, and that the neutrons released could create plutonium—another and ultimately more abundant fuel for atomic bombs. The Fermis moved to the Manhattan Project’s secret nuclear weapons lab at Los Alamos in 1944. There, Enrico collaborated with some of the world’s greatest scientists, including Niels Bohr, John von Neumann, Hans Bethe, Isidor Rabi, Richard Feynman, and Edward Teller. Taking breaks from the lab’s intensive science and engineering work, the authors show, Fermi enjoyed friendships and frivolity: he mastered square dancing, loved skiing, and when hiking in the mountains sometimes sang Verdi arias or recited verses from The Divine Comedy.

Although Fermi preferred to avoid politics, he was drawn into debates about how nuclear weapons might be used and controlled. In 1945, he served on a scientific advisory panel that agreed there was “no acceptable alternative” to demonstrating the atomic bomb except by dropping it on Japanese cities. But Fermi was decisive in 1949 when, as an adviser to the US Atomic Energy Commission (AEC), he joined colleagues to oppose a crash program for a thermonuclear hydrogen bomb. Their report called it a “weapon of genocide.” Fermi and Rabi went further, writing in an appendix: “The fact that no limit exists to the destructiveness of this weapon makes its very existence and the knowledge of its construction a danger to humanity as a whole. It is necessarily an evil thing in any light.” Fermi opposed Edward Teller’s strident advocacy for the H-bomb’s development, and is remembered for his remark that Teller was the only monomaniac he knew with more than one mania.

Fermi was drawn again into politics in 1954, when he testified in support of J. Robert Oppenheimer, the wartime head of the Los Alamos Laboratory who was suspected of Communist sympathies and tried by the AEC in a secret hearing that cost him his security clearance. When Fermi was dying of stomach cancer later that year, according to one of this book’s surprising revelations, he told a former student and colleague, the physicist Richard Garwin, that in retrospect he wished he’d been more active in public affairs.

At the University of Chicago, Fermi attracted brilliant and original colleagues and students, six of whom won Nobel Prizes in Physics. Their research also flourished beyond the university at the AEC’s Argonne National Laboratory, in the Chicago suburbs, and at the nearby Fermilab, a laboratory specializing in high-energy particle physics and accelerator research.

Another of his legacies is the “Fermi problem,” or “order estimation,” which blends his theoretical and practical talents. This technique allowed him to gain an approximate answer for a situation with few empirical data points by multiplying a series of independent estimates of things he knew. This method thus breaks down a difficult and elusive problem into a longer set of easier problems. A Fermi problem’s answer is never exact, but by using multiple variables it can narrow the scope of possible assumptions and solutions.

The authors relate Fermi’s use of this method while at the Met Lab in 1944 to speculate about extraterrestrial life, and to wonder how likely it was that space invaders had already reached Earth. When Fermi concluded that aliens could be here, and wondered where they might be, Leo Szilard answered: “They are among us. They are called Hungarians.” Fermi’s method was used again in 1945 to help estimate the force of the first nuclear explosion, which he witnessed in New Mexico in July 1945. By releasing strips of paper after the blast and watching how far they fluttered, he produced an impressively close estimate to later and more accurate evidence for 20 kilotons of TNT equivalent. In 1961, the American astronomer Frank Drake continued Fermi’s method with a calculation—subsequently known as the Drake equation—that he used to identify the number of possible civilizations in the Milky Way.

In all, this new biography brims with colorful details and instructive explanations, in a dramatic narrative that balances Enrico Fermi’s life and personality with his science.