Big Science: Ernest Lawrence, the Cyclotron, and the Birth of the Military-Industrial Complex

The term “Big Science” is attributed to Alvin Weinberg, the former head of the Oak Ridge National Laboratory (ORNL). The Clinton Laboratories, ORNL’s original name during the Manhattan Project, had produced materials for the first atomic bombs; later, the renamed ORNL supplied the materials for the growing nuclear arsenal. Despite his role at the helm of the massive lab, Weinberg was conflicted about Big Science, a term that encapsulated the trend toward larger-than-life projects staffed by thousands of scientists and requiring large government investments. The pyramids of ancient Egypt and the cathedrals of medieval Europe had proved shining symbols of their eras, according to remarks he made in 1961, but Big Science would serve merely to “placate what ex-President Eisenhower suggested could become a dominant scientific caste.”

Michael Hiltzik’s outlook on Big Science in his book by that name is more upbeat, placing physicist Ernest O. Lawrence at the epicenter of a new way of doing science. From his birth in South Dakota in 1901 to Norwegian immigrants, Lawrence showed a clear talent in science. After earning his Ph.D. in physics from Yale in 1925, Lawrence was hired as an associate professor of physics at the University of California (UC) at Berkeley in 1928, becoming the youngest full professor there in 1930. Lawrence’s rapid advancement was attributable to his formidable intellect—one of the “best experimental physicists among his age in the country,” as Hiltzik recounts. His rise also well served the ambitions of the University of California, which became a leading center of physics and a counterweight to the elite East Coast institutions. 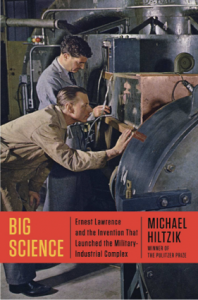 Hiltzik details the fascinating story of how Lawrence built the foundation for Big Science. The series of atom-smashing machines that Lawrence created blazed the path, starting with the 11-inch accelerator (later dubbed the cyclotron) and moving up in power to ever-larger scientific instruments. Lawrence’s work set a precedent for science as it is done today, in such diverse projects as the Hubble Telescope and the Human Genome Mapping Project. Hiltzik draws us into Lawrence’s genius as he builds the political framework and lays the cultural foundations in support of large scientific instruments and a way of doing science that persists to this day.

The creation of massive scientific instruments for probing the heart of matter and exploring the origins of the universe—while also revealing the secrets of the materials that would arm humanity with its most destructive weapons—began in a clapboard building on the UC Berkeley campus in 1932. In an early demonstration of his ability to amass the support and resources he needed to advance his quest for bigger and better science, Lawrence pulled off an “administrative, financial, and intellectual break,” and one might even say, stroke of bureaucratic genius, in separating himself from the Berkeley physics department soon after being recruited to found what was then known as the Radiation Laboratory, or Rad Lab. What was to become the Lawrence Berkeley National Laboratory (LBNL) started off modestly enough, but the ambitions of its creator were not modest, and Lawrence built his small kingdom into a model envied, admired, and emulated across the country and around the world by scientists, governments, patrons, and industry.

To its critics, the term Big Science is shorthand for what might be dubbed Big Money, and certainly funding caused friction between Big Science and so-called Little Science over the decades. Big Science was also variously described as wasteful, elitist, militarily driven, scientifically perverted, and bureaucratic. Scientists felt displaced in a system that favored those who could play to national interests and successfully lobby for big grants, charm would-be philanthropic supporters, and persuade government patrons that their work connected to the needs of the ever-growing military-industrial complex.

But Big Science also pioneered a different way of engaging scientists and of doing science through the deployment of multidisciplinary teams tackling scientific problems that could, for the most part, be solved only using large scientific instruments. Lawrence opened the door to scientists and engineers of all types, and specialized in bringing experimentalists and theoretical scientists together. In doing so, he created a unique approach to science in which experiment sometimes preceded theory and in which intuition played a role. His powerful instruments were often put together and taken apart in the lab’s signature “cut and try” approach.

One of Lawrence’s most impactful legacies was in his own backyard and bears his name. The creation in 1952 of what is today called the Lawrence Livermore National Laboratory literally doubled the nation’s nuclear weapons design and development capacity. It began when a restless Edward Teller, later dubbed the “father of the hydrogen bomb,” complained bitterly—as he had since the early days of the Manhattan Project—that the Los Alamos National Laboratory was not giving enough time and attention to the development of the H-bomb. The Atomic Energy Commission (AEC) was concerned that the establishment of a second nuclear weapons laboratory competing with Los Alamos would demoralize that lab and cause a brain drain on the already strained and underfunded post-war Los Alamos. The AEC turned to the trusted Lawrence for help. Lawrence devised a brilliant solution to the dilemma, creating the Livermore lab as a branch effort of his own Rad Lab to provide weapons diagnostics support to Los Alamos.

A formidable figure in his own right, Teller insisted that the fledgling effort at the Livermore facility, 40 miles east of Berkeley, be allowed to run some nuclear weapons tests of its own. Teller won the day, but it was Lawrence’s imprint on the Livermore lab that created its unique culture and scientific approach. Herbert York, one of Lawrence’s most promising graduate students, became the first leader of the Livermore lab. In contrast to the more academic structure and design of Los Alamos, which was organized around scientific disciplines, the Livermore lab worked more like Lawrence’s Rad Lab, bringing a variety of scientists and experimentalists together to tackle scientific problems. The lab culture that grew up around this original design shaped Livermore’s trajectory in important ways. The intense competition between Livermore and Los Alamos fed the ambitions of the armed services for more and better weapons, driving the number and diversity of weapons in the U.S. nuclear arsenal. Hiltzik is correct in his assessment (and in agreement with most other commentators) that Lawrence’s widow, Molly Lawrence, was wrong in asserting that her husband, always ready to serve his country and the needs of the military, would have disapproved of what the other lab bearing her husband’s name became.

Hiltzik, a Pulitzer Prize-winning author, columnist, and reporter for the Los Angeles Times, has written extensively over the past three decades on business, technology, and public policy, including books on the building of the Hoover Dam and Xerox PARC. In subtle but important ways, Hiltzik’s background informs his work and distinguishes it from that of writers whose primary interest is in the history of nuclear weapons. He draws much of his material from historians of the weapons program, such as Richard Rhodes, Greg Herken, and Barton J. Bernstein, but he is most interested in the intersection of industry, science, and public policy, and how these came together to create Big Science.

The big techno-scientific-social challenges of today, such as adequately addressing global climate change, dwarf those faced by Lawrence and his peers in scale, complexity, scope, and cost. Lawrence’s skills in designing a new way of doing science—including attracting and managing a diverse group of scientists and technical staff, and translating complicated scientific ideas for nonscientists—served the purposes of the nation at the time. Lawrence’s success was dependent on igniting the imaginations of his philanthropic, government, and industry sponsors and helping them feel connected to something important that was bigger than them. The outcomes he sought were different from those we seek today, but his methods may still be relevant.