Eclipse of Man: Human Extinction and the Meaning of Progress

In 1963, when the still-new science of molecular biology was reaping its first big harvest, the great bacterial geneticist Joshua Lederberg looked ahead to what the field might bring in the coming years. Technology was advancing so rapidly, he wrote in Nature, that to keep pace with it, humans would need to adapt faster than natural evolution could take us. Threats such as pollution and nuclear war, he believed, demanded that we take absolute control over our genetics, development, and environment. “In short,” he concluded, “Man, unless he grows less ‘human,’ may destroy himself.”

Lederberg could wax melodramatic, but his awe toward science and technology was real and literal: the future both fascinated and terrified him. He was neither titillated nor repulsed by the thought of mankind transcending itself. “Growing less human” to him required courage, ample respect for the forces involved, and a rational, scientific head.

Today’s techno-futurists are both more sensational and more political than he. They over-predict and tend to fracture along lines they characterize as “conservative” and “liberal.” Conservatives are disgusted by the idea of becoming no longer human. Improve humanity by all means, they say, but people we are born and people we should die. In contrast, the self-described liberals—such as Ray Kurzweil, Nick Bostrom, and John Harris—thrill to the idea of transhumanism. They would use the tools of modern technology to enhance our powers, extend our lives, and eliminate gender, race, disease, suffering, stupidity, cruelty, and ultimately, limits of any kind on what “we” can be. 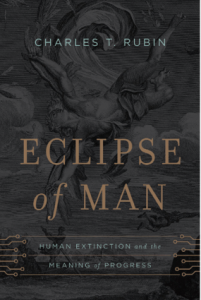 Charles T. Rubin, a political scientist at Duquesne, a Catholic university in Pittsburgh, sits squarely in the conservative camp. He joins authors such as Leon Kass, Francis Fukuyama, and Bill McKibben in opposing liberal eugenics and transhumanism on moral grounds. Kass’s 1997 argument regarding the “wisdom of repugnance” is perhaps the best known perspective. It’s a bit of a caricature, but some have mocked it as the “yuck factor.” Listen to your gut, Kass writes: If it clenches at the thought of a new innovation, that’s reason enough to believe that innovation morally wrong. Rubin argues that transhumanism implies not human progress but human extinction. Yuck.

He builds his case in a peculiarly haphazard way. Eschewing either a broad survey of transhumanism or an in-depth critique of the key tenets of transhumanist thought, he takes a muddy middle ground, cherry-picking a handful of novels and creative nonfiction publications to serve as case studies. Some of these works are dark and dystopian, others boundlessly sunny and idealistic. Rubin does not defend his selections as quintessential or landmark works; indeed, some he acknowledges as minor or ignored. One imagines him running a finger down his own bookshelves and with an “Aha!” pulling down, say, a favorite by Arthur C. Clarke. A good third of the book is devoted to lovingly detailed but digressive plot summaries. He also indulges in fictional opening vignettes intended to illustrate his central points. In the introduction, he notes that great fiction often conveys moral complexity better than exposition. His parables, though, have none of the character or plot development that gives fiction its moral power. Rubin clearly believes that this recourse to art strengthens the book, but he is at his best when he drops the literary pretense and simply makes his argument.

Rubin anchors the book traditionally, in the Enlightenment. He opens with a look back at several historical futurists, starting with the French Enlightenment thinker Condorcet. He moves on to the Progressive era, building a theme of human advancement through science and the hazards of overestimating the power of human reason. (Near the book’s end, the myth of Icarus serves as an emblem.) What Rubin does not build on, though, is the Progressive—and progressive—commitment to feminism. The contemporary transhumanist movement shares with the Great Books canon a disproportional representation of white men. Rubin goes with the flow. The lack of women or people of color in the book does not invalidate his argument, but it does mark it as conservative in the more traditional sense. Among the many risks of transhumanism that Rubin discusses, one will not find the loss of diversity.

For many of his chosen authors, the transcendence of limitation and weakness is achieved by advancing beyond what is recognizably human. The crystallographer J.D. Bernal predicted humanity calving a race of cyborgian posthuman rulers who oversee and control the blissful, ignorant “Melanesians,” who remain human in a world that has been engineered to provide and protect. In the vision of the pioneering geneticist and embryologist J.B.S. Haldane, intrinsic selfish individualism leads to the destruction of the earth; only through making man into one of the works of man do we stand a chance of survival. Although Rubin gives no indication that these works are representative of transhumanism, they do establish his own major themes in what follows.

The remaining chapters develop an argument based on roughly equating nonhuman with inhuman and amoral with immoral. Rubin begins, curiously, with Carl Sagan’s Search for Extraterrestrial Intelligence (SETI) project, whose researchers scan the heavens for signs of life. Key to the project’s ideology is the “assumption of mediocrity”: since we are barely able to reach out beyond our own planet, any civilization with which we make contact will almost certainly be more advanced. SETI is rooted in Vietnam-era apocalypticism and a tie-dyed faith that extraterrestrials will come in peace, because harmony is surely more advanced than bellicosity. But idealism is almost all SETI shares with transhumanism. Altering humanity is not integral to the SETI project. Further, the assumption of mediocrity is a form of modesty—a quality that lies at the heart of Rubin’s alternative to transhumanism. SETI thus seems a poor case study to support Rubin’s argument.

Transhumanism can take many forms. Rubin chooses to focus on nanotechnology as the means of “enabling” inhumanity. Nano-visionaries promise that molecular machines will end disease, permit immortality, provide us with superhuman powers, and enable us to redesign our bodies. Although Rubin is not explicit about why he examines nanotech, as opposed to, say, genomics or neuroscience, hints of a larger critique emerge in his synopses of Eric Drexler’s classic speculative exposition, Engines of Creation (1986) and Neal Stephenson’s novel The Diamond Age (1995). Key to Drexler’s argument is the notion of choice: the freedom to choose how and why we modify ourselves. Stephenson pushes this idea to dark extremes. The world he creates is governed by unfettered selfishness and driven by the fallacy that technological advancement leads inevitably to social improvement. It begins to seem that nanotech is but a foil. Rubin’s real “yuck” is technophilic libertarianism.

Transhumanist aspirations for brain hacks, indeterminate lifespan, and sensory superpowers, Rubin argues, have what he calls a moral lacuna at their center. If infinite possibility becomes our goal, he insists, we lose our moral compass. He never puts it quite this way, but death is what gives life meaning. Memento mori. Finitude is the only thing that raises any stakes for our decisions: on what work we do, whom we love, how we live, why we raise children. But in the transhumanist utopia anything is possible, so nothing matters.

Ultimately, then, Rubin’s main objection to transhumanism is its empty materialism, its lack of a spiritual core. This is both trivial and profound. Obviously, materialism is the essence of all modern science, not just transhumanism. And yet, transhumanism could be construed as a reductio ad absurdum of scientism, the belief that science can solve all problems. The logical flaw in scientism is that precisely because science and technology are amoral, they can be applied with equal force to good or evil. The techno-fix does not absolve society of the need for moral choice.

But perhaps because Rubin never quite takes his critique this far, his solution to transhumanism is weak and unsatisfying. It is a tepid version of an argument from hubris. As he moves into his conclusion, his writing becomes more academic, the syntax pulled like taffy into strings of passive-voice clauses:

Surely it is not as if the only future that is worth looking forward to, and working hard for, is one in which we can achieve anything we can imagine, where everything will be permitted. If it were, what we are left with is mere pride in novelty and superlatives, a constant one-upsmanship of imaginative possibilities that diminish the worth of human beings as we actually know them. With no clear goal, direction, or purpose, with willful freedom of choice as the guiding light, how could it be otherwise?

As noted, Rubin’s solution is modesty. If we simply scale back our aspirations, he writes, if we strive to improve humanity while remaining human, we retain the humanitarian impulse to relieve suffering and better ourselves without sacrificing the self. But this proposal is far too subjective to be a realistic alternative to the technological juggernaut. Scale back to where? Are we to establish a federal modesty commission to enforce a humble red line that techno-liberals must not cross? Rubin simply defends his own morality against the deficiency inherent in transhumanism. In short, Rubin’s argument for modesty is less a solution to transhumanist hubris than an expression of his own moral identity—his persona, his ego.

A more muscular response would be an argument from humility. Transhumanists and eugenicists have always maintained that we are on verge of knowing enough to take the reins of our own evolution and steer ourselves toward perfection. This argument conflates technical prowess with scientific understanding. Technology is the acquisition of power; science, perhaps most accurately, is a process of discovering our ignorance. Thus, the more we can do, the less we appreciate its implications.

Every major technical advance or scientific insight leads to the opening up of a vast world of undreamed-of complexity that mocks the understanding we thought we’d achieved and dwarfs the power we hoped we’d acquired. For example, in 1910, Mendelian genetics appeared to present a complete explanation of heredity and was used to justify an appalling program of segregation, marriage restriction, and sexual sterilization. It is easy, from our vantage, to tut at their ignorance. Yet today, transhumanists, so-called liberal eugenicists, and other techno-visionaries make the same argument—adding that individual choice (the selection by parents rather than the government of desirable traits in their children) solves the moral problems of eugenics.

Meanwhile, most of the dogmas of modern biology are being drastically revised, if not overthrown. The gene itself is in danger of vanishing, a single bit of plankton in a sea of interacting genomes and genetic and developmental regulation. Further, these vast networks warp and rearrange themselves in different environments. Consciousness—to say nothing of memory—is an emergent property of all this and more.

Consider Lederberg again. To knowledgeably direct our own evolution, we would need something close to a complete explanation of genetics, epigenetics, the microbiome, development, evolution, and ecology. The strong argument from humility, then, is to acknowledge that were we to control our own evolution, we would almost surely muck it up. In short, we can paraphrase Rubin by recasting Lederberg: man, if he tries to grow less human, may destroy himself.