By by Benjamin K. Sovacool and Michael H. Dworkin

This is a highly useful and aptly titled book, virtually a one-volume education in the array of normative challenges posed by the various aspects of our global energy regime. That “regime” is the interlocking structures and practices by which energy of all sorts is generated, distributed, and consumed. An “energy-just world,” according to authors Benjamin Sovacool and Michael Dworkin, is one that “equitably shares both the benefits and burdens involved in the production and consumption of energy services, as well as one that is fair in how it treats people and communities in energy decision making.”

Inequity inevitably permeates this regime. Supply, cost, governance, and the hazards of extraction, generation, distribution, and use all create winners and losers. An “energy-justice” perspective attempts to grapple openly with these difficulties, acknowledging that technical and economic analyses alone cannot. A key problem—but one turned to an advantage by this volume’s authors—is that centuries of philosophical endeavor have yielded many ways to slice the apple of “justice.”

Current, comprehensive, and nicely integrative, Global Energy Justice should serve students, scholars, and policy makers well—insofar as they might want an excellent and well-referenced tour of a vast landscape. A book like this, however, will likely frustrate anyone looking for a “best” way to think about and sort through the tangle of policy dilemmas and competing priorities that face us on energy and the environment. After pushing my way through this long but unfailingly engrossing book, I emerged even more firmly convinced that real environmental justice necessitates a strong role for energy justice.

Structure is a major virtue in this work. Eight core chapters offer identical framing questions: What is reality? What is justice? What is to be done? Each chapter launches with a concrete example that effectively propels the reader toward one of eight energy problems linked to eight justice principles. In the process, the reader receives a short introductory course in the various philosophical approaches to justice; for some readers this will be new territory, for others a reunion, via energy policy, with old acquaintances. Enter Aristotelian “virtue” to pave the way for a foray into energy efficiency: the authors invoke Plato and Aristotle to suggest that from such a perspective, the virtuous fulfillment of the energy system’s “essential purpose” would be the minimization of energy waste, a goal far from realization in numerous respects “related to energy supply, conversion, and end-use.”

Next up is the problem of externalities, to be explored with reference to John Stuart Mill, Jeremy Bentham, and “utility.” In similar fashion, Jürgen Habermas matches up with due process and “procedural justice,” John Rawls and Amartya Sen with energy poverty and “welfare and happiness,” and so on. It will surprise no one that foremost anti-statists Robert Nozick and Milton Friedman turn up in the chapter on energy subsidies and “freedom.” The philosophical exposition is clear throughout, though perhaps (this reader suspects anyway) too simplistic to satisfy the most dedicated devotees of these veins of thought. More importantly, the authors promptly follow each of these excursions with a section entitled “What is reality?” detailing the many real-world energy-related departures from the philosophical ideals described. 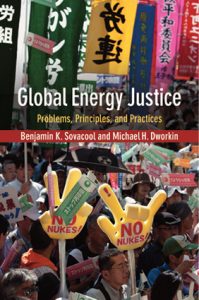 The book is a two-fold intellectual rescue mission. On the one hand, and most importantly, it attempts to restore (or arguably, to inject fully for the first time) a focus on justice to an energy policy discourse from which it has gone missing. In one early statement that frankly startled me, the authors report that “a series of recent content analyses of the top energy technology and policy journals confirms the perceived unimportance of justice as both a methodological and topical issue.” Only six of 5,318 authors had demonstrable “training in philosophy and/or ethics” and there was only one appearance of the word “justice” in a title or abstract.

The second, and related, component of rescue is the book’s determination to counter the perennially “dominant”—the quotation marks are the authors’—position in climate change and other energy policy matters taken by economic cost-benefit analysis, which naturally privileges readily quantified, often monetized, benefits and costs and, unless aggressively supplemented by normative assessment and deliberation, tends to subordinate matters of ethics and fairness. Indeed, I very much had the sense—perhaps necessary in a project that clearly consumed years of precious scholarly effort—that the authors wrote an up-to-date version of the book they wish they had been able to read while in school.

The book is in line with a recent maturation and deepening of environmental justice scholarship. We have moved past case studies of valiant, distressed communities and crude efforts at quantification (such as the 1987 report “Toxic Wastes and Race”) that served as transparent launching pads for whatever “Not in My Back Yard” (NIMBY) efforts activists believed worth conjuring under the guise of “environmental racism.” However effective this earlier work may have been in raising public awareness, it was much less helpful for deciding what is to be done. These authors understand that the pursuit of justice is complex, contingent on context, and approachable from multiple vantage points with intellectual honesty.

Sovacool and Dworkin’s “divergent strands” approach to energy justice is worth pausing over. A “global energy system that fairly disseminates energy services, and one that has representative and impartial energy decision-making” involves three “key” elements: costs (including “how the hazards and externalities of the energy system are imposed on communities unequally”); benefits (including “how access to modern energy services and systems are highly uneven”); and procedures (or “how many energy projects proceed with exclusionary forms of decision-making that lack due process and representation”).

The hazard for some naïve readers of a book like this is that the proliferation of both ideals (the “happiness, welfare, freedom, equity, and due process for both producers and consumers”) and tools meant to serve them (including various forms of participatory engagement and systematic second-guessing) can appear less problematic than they are likely to prove in practice. This is just to belabor an obvious point: all reforms have unanticipated costs, limitations, and consequences for which we must be ever alert. (On this point see David Konisky’s recent book, Failed Promises: Evaluating the Federal Government’s Response to Environmental Justice.) In the real world, of course, the philosopher’s eye for justice must mesh with the manager’s focus on implementation, the politician’s emphasis on “deals that are do-able,” and, yes, the quantitative analyst’s head for numbers, or so we preach to the students in every public policy graduate program of which I am aware.

Simple strengths of this volume for students and novices include some useful “energy basics,” a dose of technology history, and a cascade of arresting “factoids” laced throughout to great effect. Refrigerators, we learn, consume about 17 percent of the average household’s electricity. The coal and oil/gas markets differ notably in structure. The globe is home to 75,000 power plants, almost 20,000 of them in the United States, and “the country has more electric utilities and power providers than Burger King restaurants.”

For a reader who has himself tilled the fields of “environmental justice,” it is refreshing to read a presentation that deals capably and creatively with both the polluting externalities and the energy-supply deficiencies that bedevil the global poor. Too often in the past we have been offered only the former, analyses spawned by the industrial West and the peculiar varieties of disadvantage and grievance that predominate within it (that is, a focus on ambient emissions and fear of novel technologies more than the ruinous effects of energy and technological inadequacy). Such an environmental justice posture can be of scant comfort to those situated, say, among Paul Collier’s famous “Bottom Billion”—families and communities that must cook over fires stoked in wood and dung, if they have anything to cook at all. This is a major value of reconceiving environmental issues within the global energy justice frame.

I came away from the book with a few reservations, as I expected to. The discussion of nuclear power suggests perhaps less promise than it might if we were not confined to current or historically predominant reactor designs and the waste-management needs that flow from them. As my late University of Maryland colleague John Steinbruner reminded us on several occasions, nuclear power’s future, to be viable, must be considered quite separately from the organization and operation of today’s nuclear industry. I also wonder whether a book like this inherently solidifies, rather than mitigates, the nuclear NIMBY problem. The “chest of tools” for engagement and fair procedure, such as public consultation and environmental evaluation, can potentially morph into an armory of weapons meant to delay rather than refine action in the hands of advocates determined to “just say no.”

The challenge of environmental and energy problem prioritization, already enormous, will only grow as we place on the table even more considerations and means of parsing them. At the end of the day, can any book help make inevitable losses palatable? To frame it in justice terms: when conditions do not admit a win-win strategy, who deserves to lose? This book offers a foundation for grappling with these difficult questions.

Benjamin K. Sovacool and Michael H. Dworkin have produced a fine book that fills a niche in a vitally important literature. I look forward to many years of pressing it on my students and colleagues as a useful aid to their thinking.