Is China a Clean-Energy Model?

The Globalization of Clean Energy Technology: Lessons from China

Global climate negotiations have long been stymied by disagreement between rich and poor countries over who should take responsibility for mitigating greenhouse gas emissions. Less-developed nations tell developed countries, “You created this problem, you do something about it.” They mean that many nations have grown rich from centuries of fossil fuel use and carbon dioxide emissions and should therefore help poor nations to pay for initiatives designed to reduce emissions. Developing countries argue that their priority is on the urgency to provide for basic human needs and lift billions of citizens out of grinding poverty and that developed nations should be willing to give them access to low-emissions energy technology and finance its deployment. Developed nations counter that the developing countries have very inefficient economies and energy systems and would reap broad benefits from investments in high-efficiency, low-emissions energy technology. Climate negotiators on occasion have agreed to provide large sums to support such an effort, but few are surprised when the funds never materialize. The lack of progress following the contentious 2009 Copenhagen Summit is typical of the climate negotiation process.

In her new book, The Globalization of Clean Energy Technology: Lessons from China, Kelly Sims Gallagher tries to move us beyond this divisive debate by examining the extraordinary example of China’s surge to global clean-energy leadership. Gallagher is well-positioned to consider lessons from China. She has spent over a decade in serious study of Chinese energy development and has generated a solid body of scientific publications on the subject. She has spent time in China and has toiled in the technology transfer proceedings of the Intergovernmental Panel on Climate Change (IPCC). 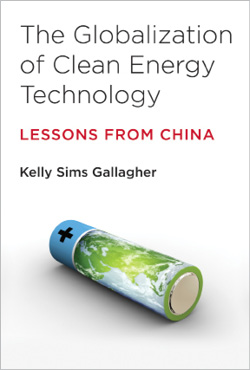 Gallagher’s book suggests that Chinese experience in clean-energy technology development and deployment indicates that concerns about barriers to technology diffusion are exaggerated. The notion that China is an example of clean-energy success will surprise some observers. Many readers are familiar with images of impenetrable smog over China’s big cities, which rank among the world’s most polluted, and the fact that China has surpassed even the United States in annual emissions of carbon dioxide. Yet, independent researchers have documented China’s remarkable achievements in energy conservation. Gallagher also applauds that success and, echoing many renewable energy advocates, suggests that China is a model for developing countries to emulate in acquiring the technology needed in the global fight against climate change. China’s recent bilateral agreement with the United States to meet emissions-reduction goals would seem to validate the notion that China is confident in its ability to respond to climate change without aid from the developed world.

Gallagher attempts to make that case by presenting four original case studies of Chinese clean-energy technology transfer and deployment. Through interviews with foreign and domestic players, she explores the incentives for and barriers to the use and production of solar photovoltaics, batteries for electric vehicles, gas-fired turbines, and coal-gasification systems.

She characterizes solar photovoltaic cells as a successful case of tech transfer, gas turbines as unsuccessful, and batteries for electric vehicles and technologies for coal gasification as mixed. She often draws comparisons with relevant case studies by other analysts, in particular a well-regarded book on wind-turbine power systems by Joanna Lewis of Georgetown University. She explores the extent to which intellectual property laws and lack of access to capital frustrate the use of technology in her four cases and in the reports of other experts. She makes an unequivocal and surprising claim that there are no barriers to finance for Chinese firms. She also finds that foreign and domestic firms have more confidence than one might expect that they can protect their intellectual property. Gallagher suggests that China has demonstrated how developing nations can overcome perceived barriers to technology transfer and company development. The key, she argues, is creating market demand and the policy environment to support it.

Is it that sunny?

It would be challenging to argue that she is wrong. China has reduced its energy intensity at an unprecedented rate for more than two decades. The nation leads the world in wind-turbine construction and solar photovoltaic panel manufacture. China’s success in deploying solar water heating, which Gallagher does not emphasize, is unmatched.

Yet, the full picture of China’s energy system is not so rosy. China recently committed to a major expansion of coal use for power generation and gasification in its arid west. China’s wind and solar power contribute very small shares of its large and growing energy economy. The wind system, as others have demonstrated, is underutilized and inefficient. Some analysts believe the wind-power experience is to be expected in a state-owned and largely unregulated power-transmission monopoly that does not welcome power from independent producers tapping intermittent sources. Solar power installations similarly face a hostile environment in which the state-owned grid companies have neither the incentive nor the inclination to integrate their intermittent output. This is not a model to emulate.

The reality is that recent and foreseeable growth of renewable energy in China has been dominated by large-scale hydroelectric power, raising the question of what exactly is meant by clean, renewable energy. To her credit, Gallagher makes clear in a footnote that she does not include large-scale hydro in her own definition of clean energy, and the book includes numerous allusions to negative effects of renewable energy systems. But the overall message of the book is that China’s renewable energy program is a success, even though her understanding of success differs from the perspective of the Chinese government. She more than once quotes former Prime Minister Wen Jiabao boasting that China has achieved great success in this field when in fact the first source he mentions is hydroelectric power. As it stands, Chinese plans call for something like seven times the equivalent of the Three Gorges Dam to be built by 2025. This fact detracts from the case for China as a model for clean energy development.

The unsuccessful gas turbine case supports Gallagher’s assertion that market development is key. She accurately reports that in distributing its limited natural gas supply China gives a higher priority to its use as a chemical feed stock than as a source of electric power. Although more could have been said about China’s slow acceptance of gas imports and, more problematically, with the development of gas resources independent of the state-owned oil and gas companies, it does not undermine her point. That the chiefs of those companies sit on the Chinese Central Committee suggests that the case studies might have placed “governance” square and center in the “barriers” category. Gallagher does arrive at roughly the same conclusion by stating that it is the failure to create markets that causes failure of tech transfer and technology deployment.

The question of whether rich nations should subsidize developing country investments in clean-energy development will probably not be put to rest by China’s success at finding ways to finance hydropower and wind. Chinese climate negotiators have in fact privately acknowledged for several years that they neither need nor expect funds from the West for clean-energy development. But they quickly point out the inequity of the situation caused by the “opportunity cost” of effectively taxing China’s economy to solve a problem created by the rich. Certainly for the many countries in South Asia and Africa that have not been as successful as China in growing their economies, the opportunity cost of developing clean energy would have direct consequences for the well-being of billions of people.

A closer look at how China has financed energy development illustrates the problem. The low cost of finance for Chinese clean-energy firms is the direct result of what the Peterson Institute’s Nicholas Lardy describes as “financial repression.” This term refers to the regulatory depression of interest rates paid to everyday savers who earn low interest on their bank deposits. Those funds, in turn, become sources of low-cost capital for national priorities such as energy development. When bankers, encouraged and guided by local governments, provide that funding to clean-energy startups and growing companies, the temptation to engage in “crony capitalism” must be overwhelming. The inefficiency, corruption, and consequent political backlash have become urgent challenges for the current Chinese leadership.

Is China a clean-energy model for developing nations to emulate? Gallagher does not present a clear answer. She references China’s unprecedented success in energy efficiency. That success, more than anything else, has given China the confidence to set for itself difficult targets to cap and reduce carbon dioxide emissions. But her case studies show China is unprepared for its new, aggressive push into coal gasification and natural gas imports. Her review of renewable energy reveals the troubling reality that the term “clean energy” means different things to different people.

Gallagher is right that China is a good place for continued study of clean energy and what it means and how it might work. Hers is a useful book for updating the argument on climate response between developing and developed countries.