Innovation and Its Enemies: Why People Resist New Technologies 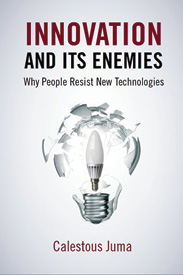 On the one hand, the world is obviously a much better place than it used to be.

Don’t take my word for it: the past few years have seen a surge of evidence. Data visualization wizards, such as Sweden’s Hans Rosling and Oxford economist Max Roser, have used their two projects (Gapminder and Our World in Data, respectively) to graph human progress over the past several centuries, using axes measuring prosperity, health, education, female empowerment, and other metrics. Best-selling books, such as Harvard professor Steven Pinker’s The Better Angels of Our Nature, detail an increasingly peaceful world. Columbia University’s Ruth DeFries’s The Big Ratchet shows how humanity is growing more food more efficiently, making food cheaper, and leaving more room for wild nature. Nearly everywhere we look we are, as Charles Kenny succinctly but memorably titled his acclaimed 2011 book, Getting Better.

On the other hand, the world is full of risks, dangers, and insecurities that humans have not previously encountered.

The challenges facing humanity today have accumulated in both magnitude and complexity. They include climate change, the loss of ecosystems and animal populations, social and economic inequality, and a historically familiar resistance to multiculturalism in many countries. Making matters worse, the public and social institutions we count on to rebuff these risks are under attack.

Those of us pleased by the general outcomes of modernity (myself included) should take a moment to consider this tension, for it represents a real challenge to continued modernization for both the rich and the poor today. Although progress has become more robust and sophisticated over the course of modern history, so too have the powers that stall, obstruct, and reject progress.

In his new book, Calestous Juma pits these two forces viscerally against each other. Fittingly titled Innovation and Its Enemies, the book charts a fascinating new history of emerging technologies and the social opposition they ignite.

Juma would be high up on the list of experts to consult about such things. He is a professor of international development at Harvard University’s Belfer Center, directing the center’s work on science, technology, and globalization. An expert in agricultural systems and technologies, Juma has long been steeped in controversies over agricultural trade policy, genetic modification, and other agriculture and biotech debates.

He begins his book with a schema for why societies might resist innovations—a representation so lengthy and complex one wonders how any new technology could overcome it. Among other obstacles, Juma highlights intuitive factors, such as disgust and defense of what’s considered “natural,” vested economic interests, socio-technical inertia, and responses, such as risk aversion, that can stem from both intellectual and psychosocial motivations. With this structure, Juma makes it easy to draw parallels between his case studies—coffee, the printing press, margarine, farm mechanization, electricity, mechanical refrigeration, recorded sound, transgenic crops, and the genetically modified AquAdvantage salmon—and the social resistance to them on display today.

Searching for a precursor to the currently ascendant backlash against outsider faces, perspectives, and cultures? Look no further than authoritarian sixteenth and seventeenth century objections to coffee, a then-novel drink that was consumed in public spaces that “served as secular forum for conversation that drew people from all social strata.”

The seemingly endless battle of words and policies between renewable energy and nuclear power advocates? Let’s flip back to the dissemination of electricity itself, which saw Thomas Edison and George Westinghouse amp up their largely technical dispute with claims over morals, identity, and public health.

Concerns over human neuro-cognitive therapies and pharmaceuticals? These clearly echo anxieties over genetically modified crops, in that both innovations violate some (or many) definitions of what’s “natural.”

These are the CliffsNotes, of course. None of these innovations faced simple or singular opposition. Indeed, one of Juma’s conclusions from his case studies is that challenges to new technologies are “ not always direct but often clothed in other concerns depending on contemporary social and political factors.” Many emotional, rational, and faux-rational forces can be marshaled to quell the rise of a strange or distasteful new technology. Sometimes these forces might even be necessary, as when an innovation stands to profit the few at the expense of the many.

How, then, might we responsibly guide and accelerate innovation against its enemies? Technological superiority appears to be a powerful, if insufficient, condition: coffee proved a better stimulant than khat in Yemen or chicory in England and Denmark; electricity ultimately proved safer, more useful, and cheaper than its predecessors kerosene and town gas; transgenic seeds really do allow more food to be grown on less land, sparing large impacts on ecosystems and biodiversity.

But social organization and social license can be decisive as well. The printing press clearly serves the purpose of spreading literature and ideas better than oral history and copying by hand, but the cultural traditions of Muslims delayed acceptance of the printed word in the Ottoman Empire for four centuries. A previously fractured and unorganized dairy lobby in the United States fortified itself to fight the arrival of margarine. Juma quotes the medievalist Lynn White, writing that “the acceptance or rejection of an invention … depends quite as much upon the conditions of society, and upon the imagination of its leaders, as upon the nature of the technological item itself.”

Advocates of a particular technology commonly condescend toward “Luddites” who resist technological change. Pro-nuclear figures recite turgid technical and safety statistics to argue for its dominance. Biotechnology advocates refer to their interlocutors as “flat-Earthers” for resisting genetic modification. Climate campaigners demand a “wartime mobilization” of renewable energy technologies, casting aside concerns about energy system transitions, fuel prices, and local preferences for energy infrastructure. This is an understandable impulse; the promise of new technology is appealing to many, and societies have never had greater capacity to safely integrate innovation than they do today.

But it would be foolish to conclude that the best stance is to laugh off social resistance and blindly cheer the forceful arrival of new technologies.

Hallmarks of modernization include the centralization of production and the democratization of consumption. In other words, we have never had access to more and better technologies, but we (or at least most of us) are also far removed from the modes of production that make modernity possible. This distance from the source of ever-changing technology makes it inevitable, and appropriate, for the public to exercise its democratic skepticism toward a variety of innovations. The skeptics’ case is even stronger when innovation arrives without their consultation, which, as Juma puts it, “may confer more benefits to the producers, but [also] exposes them to collective action by consumer groups.”

So innovation’s enemies are not simply the enemies of modernity. They are modernity itself, with all its contradictory desires, forces, and discourses. Integrating this diversity of values and perspectives will take, Juma writes, “a worldview of the future that visualizes exponential technological advancement, appreciates the perception of loss in complex socio-economic systems, and develops more appropriate approaches for supporting informed decision making.” That means bold and bright political leadership. It means movements to fire up the public’s imagination. It means negotiating and channeling multiple social perspectives toward solving common problems.

It also means that the innovations and technologies we hope for might arrive a little more slowly than some of us would like. But we shouldn’t forget, in our impatience, that we have never been better equipped to pursue a bright technological future.