By Paul A. T. Higgins

The Collapse of Western Civilization: A View from the Future

People are causing climate to change and it poses serious risks to society. Although there are many options for dealing with it—including some that could be tailored to fit smoothly with virtually any political viewpoint—decision makers have largely failed to agree on meaningful climate change risk management. Indeed, policy makers even disagree about whether there are risks to manage at all. The scientific community has been largely ineffective at engaging with the broader society, which contributes to the confusion and dysfunction that characterizes public discussions of climate change.

This is the situation today. Naomi Oreskes and Erik M. Conway, both historians of science, build on it to create The Collapse of Western Civilization, a grim story of catastrophic climate change in the 21st century as viewed retrospectively from the close of the 24th century. From that distant perspective, the narrators look back at this century and analyze why the people of today failed to respond, even as the consequences of climate change became obvious and dire.

In short: scientists proved unable or unwilling to communicate with the public about climate change in a way that non-scientists could understand and that decision makers could act upon. This allowed powerful interests and some politicians to mislead the public and block meaningful policy responses with impunity. Climate changes escalated and disaster ensued.

The story is compelling because it uses a single depiction of the future to illustrate the potential consequences of climate change. This cuts through the ambiguity that comes with a broad range of possible outcomes in an uncertain future. The authors’ approach helps to focus the reader’s attention on risks that are real, but obscure and hard to quantify—risks that might matter most to decision making.

The authors are clear at the outset that their story is fiction and that this is only one possible future. Yet the consequences of climate change in the world Oreskes and Conway create are certainly plausible. Indeed, it is hard to imagine the ongoing large-scale disturbance of the planet’s climate system (a basic life support system, after all) not eventually leading directly to very serious societal consequences. 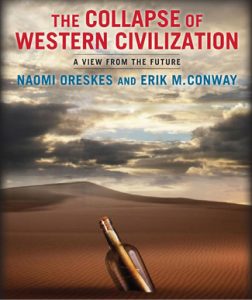 But is it appropriate to present a single future when a wide range in outcomes remains possible? Even if the odds are dwindling, civilization could still get lucky. Technological advances could cause emissions to decline rapidly without major policy intervention, climate sensitivity could be toward the low end of the anticipated range, and biological resources and social institutions could prove surprisingly robust in the face of climate changes.

The goal for scientists (myself included) is the comprehensive consideration of climate change. That needs to include a discussion of the range of plausible outcomes, impacts, likelihoods, and potential responses, among other policy-relevant topics. In presenting a single future, The Collapse of Western Civilization takes a different approach and explicitly calls scientists out for two characteristics that have made engagement with the public on climate change ineffective.

First, scientists of our day misled the public, the authors argue, by “plac[ing] the burden of proof on novel claims.” That is, scientists require high statistical confidence to attribute impacts to climate change and largely ignore whatever does not achieve that statistical confidence. As a result, scientists downplay the potential of the most serious risks of climate change—singular events for which attribution is difficult, such as more frequent or intense extreme weather events, the widespread loss of biological resources, or the potential for societal breakdown. To the extent that scientists consider the truly awful outcomes, we often say the probabilities of them occurring are low when those probabilities are actually unknown.

Second, scientists tend to focus narrowly within disciplines and conduct reductionist experiments. This prevents understanding climate change in the broad terms that matter most for the public. A focus on narrow insights (e.g., climate sensitivity, degrees of global temperature increase, and centimeters of sea level rise) does not remotely capture the societal implications of climate change.

This explains, in part, why assessments of climate change risks so often depend on the disciplinary background of the experts who conduct them. Economists often conclude that climate change will most likely have small and manageable consequences, while physical and natural scientists see a higher probability for serious disruptions. Experts from different disciplines possess insights (and wear blinders) that are difficult to integrate (or overcome). This is a major problem that scientists need to address.

An additional issue for scientists to consider, which is raised only implicitly in the book, is the difference between scientific discussions and legal advocacy. Scientists, rightly, are expected to present all relevant evidence, even if contradictory. This is critical because science is the search for knowledge and understanding and all information is relevant. In a legal proceeding, lawyers present the strongest possible case for their side. The goal is advocacy on behalf of a client rather than advancing knowledge wherever it may lead.

Policy discussions tend toward the legal advocacy model but it would be a mistake for scientists to lose our commitment to knowledge and understanding in pursuit of greater policy influence. It would undermine scientific integrity and diminish scientists’ credibility with the public and decision makers. Worse, it would mean giving up scientists’ greatest political asset: the ability to provide useful and trustworthy information. Scientists will never (and shouldn’t aspire to) have the brute political power of wealthy interests or value-driven constituencies.

Scientists can contribute most effectively by helping policy discussions to be a little more scientific while recognizing that science is never the final word in policy. Scientists can communicate what is known and understood as accurately as possible and can acknowledge the ways our understanding might be limited or wrong. We can present a range of potential outcomes, including the worst outcomes and those in which society gets lucky. And scientists can fight very hard against misrepresentations of science in public discussions.

Scientists have a great deal to contribute to the public discussion, as The Collapse of Western Civilization asserts. But there are also challenges and dangers to navigate in going beyond the design and implementation of experiments that generate new understanding. Scientists have no special capability or authority when it comes to balancing choices or determining societal priorities. These are subjective value judgments based on whether you are, for example, more risk averse to changing the energy system or altering the earth’s climate, or the extent you trust governments to correct market failures.

Despite decades of intensive scientific research, scientists cannot predict the societal consequences of climate change ahead of time. Those consequences depend on too many complex and nonlinear interactions among the physical characteristics of the earth, the biological resources on which society depends, and the social institutions that people have created. Even with additional decades of intensive study (whether narrowly focused or interdisciplinary), it will almost certainly remain impossible to know the likelihood of catastrophic outcomes such as those depicted in The Collapse of Western Civilization. Of course, even if the future consequences of climate change were known, reasonable people will differ on their preferred policy responses. This makes climate change a complex risk management challenge that combines scientific information from dozens of disciplines and sub-disciplines, deep uncertainty about societal consequences, and value judgments that have little or nothing to do with science.

The Collapse of Western Civilization illustrates the potential dangers from climate change, which can help readers think more clearly about the risk management choices society faces. The book may also encourage scientists to reflect on their role in society. If it helps scientists engage more effectively with the public by focusing on the key strengths of science, the book could help improve a flawed political system and enhance the potential for all branches of science to further benefit society.