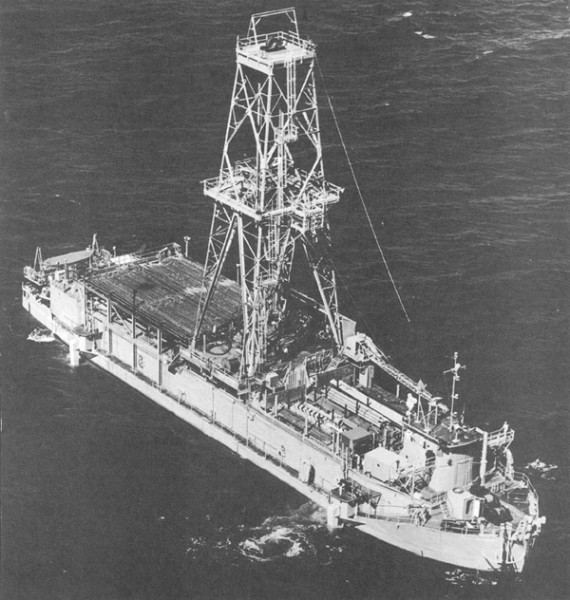 Drilling a Hole in the Ocean

Project Mohole represented, as one historian described it, the earth sciences’ answer to the space program. The project involved a highly ambitious attempt to retrieve a sample of material from the Earth’s mantle by drilling a hole through the crust to the Mohorovicic Discontinuity, or Moho. Such a sample, it was hoped, would provide new information on the Earth’s age, makeup, and internal processes, as well as evidence bearing on the then still controversial theory of continental drift. The plan was to drill through to the Moho through the seafloor at points where the Earth’s crust is thinnest.

Only the first phase of the projected three-phase program was completed. During that phase, the converted Navy barge pictured here conducted drilling trials off Guadalupe Island in the spring of 1961 and in the process broke existing drilling depth records by a wide margin. Although Project Mohole failed in its intended purpose of obtaining a sample of the Earth’s mantle, it did demonstrate that deep ocean drilling is a viable means of obtaining geological samples.