The global scientific landscape is changing. During the past decade, many governments, convinced that their economic futures lay with knowledge-based economies, sought to strengthen national research and education. Increased foreign scientific competitiveness may be little noticed from within the U.S. research community, whose output still dwarfs that of any other country. Nevertheless, in aggregate these shifts are beginning to have an impact on U.S. research.

Although in many countries cultural and economic barriers still hamper scientific achievement, foreign science policy goals are clear. Thus, hurdles are likely to be overcome, and scientific progress is likely to accelerate. U.S. scientists will face intensified competition for the best students, corporate research support, space to publish in the top journals, and patents. Inevitably, this will reduce the perceived achievements of younger generations of U.S. scientists. Although they will work far harder than previous generations, they will not command the same dominating position in world science as did their predecessors.

The graphs below plot the rate of growth in key science and technology indicators in the United States and a group of science-minded Asian countries: Japan, Taiwan, South Korea, Singapore, China, and India. All the figures illustrate graphically a country’s rate of growth relative to a base year. Absolute values for the final year are included numerically below the graph. Although in most cases the absolute values are relatively small, the sometimes astonishing rates of growth deserve careful attention. Data are drawn from the National Science Foundation, CHI Research, and the Organization for Economic Cooperation and Development. A more complete treatment of the subject can be found at www.aaas.org/spp/rd/hicks404.pdf. 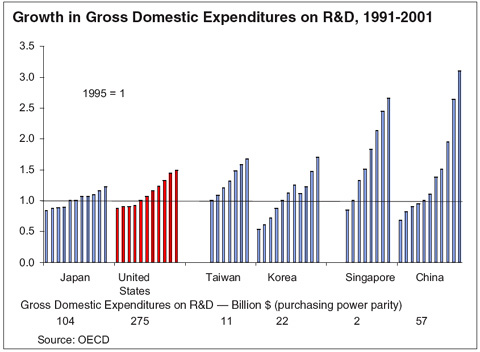 U.S. R&D spending rose by about 50 percent between 1995 and 2001. But this rate was exceeded by Taiwan, Korea, and especially Singapore and China, where spending more than doubled and tripled, respectively. Nevertheless, at $275 billion in 2001, U.S. spending dwarfs that of all other countries. 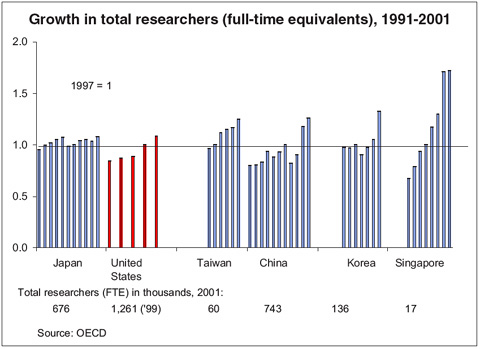 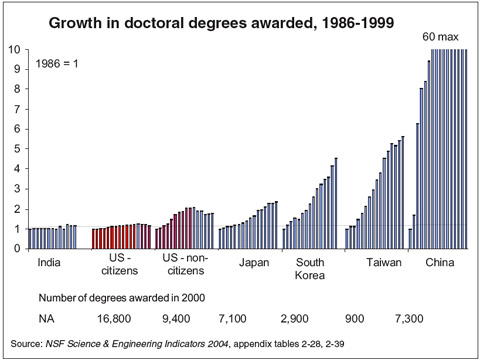 The number of doctoral degrees in China has exploded more than 50-fold since 1986. Although Chinese science education is recognized for its rigor, at the Ph.D. level respect for authority and the spirit of conformity still handicap Chinese science, according to a recent Nature article. In spite of this, the dropoff in the number of non-U.S. citizens awarded degrees in the United States does seem related to the growth in degrees awarded in Asian countries. 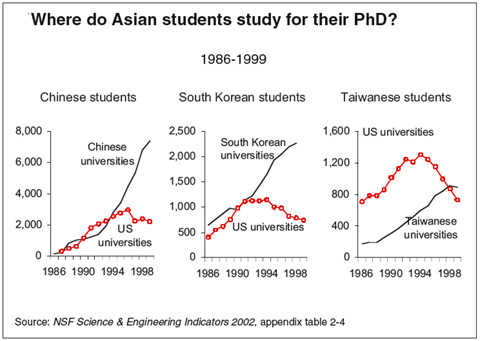 Where do Asian students study for their Ph.D.?

The drop in the number of degrees earned by Asian students in the United States and the difficulty in convincing Americans to pursue Ph.D.s in the sciences pose a potential threat to the vitality of U.S. science. 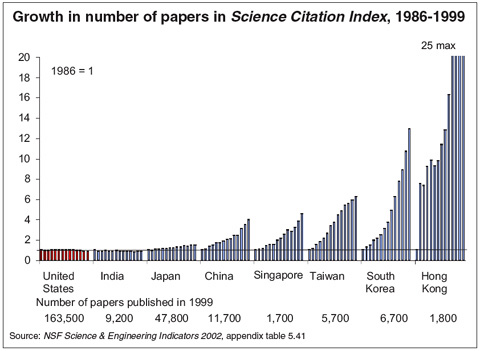 Strong growth in Asian output of scientific papers affects the United States, because space is limited in the top journals. If output elsewhere, including Europe, strengthens in quality and quantity faster than the journals grow, U.S. scientists will inevitably experience more rejections of their papers. 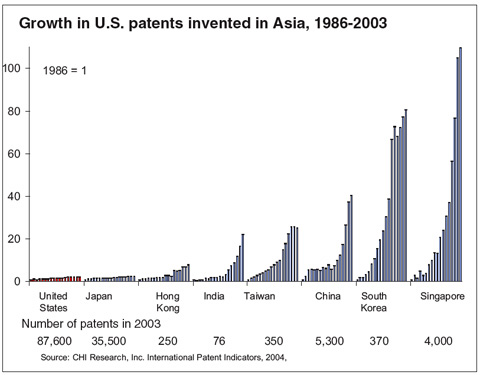