The Lives to Come: The Genetic Revolution and Human Possibilities

To be successful, the Human Genome Project, the 15-year-long effort to map the estimated 3 billion nucleotides and 100,000 genes that form the genetic makeup of a human being, will need to achieve major breakthroughs in a host of scientific and technical fields. No less challenging are the philosophical and ethical questions that must be addressed and adequately resolved if this huge expenditure of energy and talent is to result in a net improvement in the quality of human life. 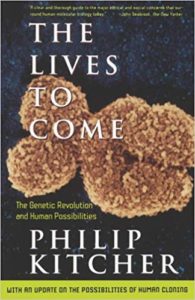 Philip Kitcher’s The Lives to Come is an introduction to some of the most important legal, ethical, and philosophical issues raised by this revolution in molecular biology. Fluently written in a manner accessible to any lay reader and free of either scientific or philosophical technicalities, it provides a series of compelling explorations of key philosophical issues. For all its accessibility, however, this is a sophisticated book. Its commonsense arguments are based on an important series of philosophical discussions that Kitcher is able to navigate through and draw on with ease.

After a good introduction to the basic science and technology of contemporary molecular biology, Kitcher embarks on a series of explorations of key issues raised by recent advances. What principles should guide the movement of increasing numbers of genetic tests out of the lab and into society? When is gene replacement therapy (rather than more standard treatment approaches) a suitable response to medical conditions? To what extent-if ever-may genetic information be used to discriminate among applicants for insurance or employment? Is it wise to rely on DNA evidence in forensic contexts, and should we welcome or oppose widespread DNA typing for identification purposes? Can we develop a set of concepts, particularly a clear distinction between “disease” and “normalcy,” that will facilitate sound medical and prenatal decisionmaking and can help society avoid a dangerous slide into eugenics? Finally, to what extent will our cherished notions of individual freedom and responsibility withstand the influx of new information suggesting that much of our behavior, including such intimate matters as sexual preference, is shaped by our genes?

Again and again, Kitcher brings good judgment and in-depth knowledge of the scientific and philosophical issues involved to bear on these questions. His treatment of genetic discrimination in insurance is one example. Probably no area today is more contested and more in need of resolution. The threat of genetic discrimination hangs over everyone and impedes both research and the deployment of valuable genetic diagnostics or therapies. Nevertheless, insurance underwriters continue to press for the opportunity to include genetic risk factors in their actuarial decisionmaking, as they have traditionally done for many other preexisting or familial medical conditions.

In the face of this controversy, Kitcher invites us to participate in an exercise involving what he calls “the great unveiling.” Tomorrow, the genetic truth about each of us will be known. Roughly 10 percent of us will learn that we carry allelic combinations that place us at significantly high risk for some disease. Today, we can vote for one of two proposals dealing with the way in which health care will be run. The first assigns medical insurance premiums on the basis of risk; the second, independently of risk. Unaware of how you will fare in the genetic lottery but knowing that your choice will affect you, your children, and your grandchildren, how will you vote? On the basis of this experiment, Kitcher argues that it is probably wise to look at this aspect of the health care system as “a cooperative venture in which the fortunate help to support those who have been victims of circumstances.”

Philosophically informed readers will recognize that Kitcher’s argument here draws on John Rawls’s contract theory of justice, with its provocative idea that basic social policy be chosen from a hypothetical “original position of equality.” Although it is rare that the formation of major social policies ever offers an actual Rawlsian moment of choice, the issue of genetic discrimination is one such opportunity. We all know in a general sense that we will soon confront genetic information of fateful importance for our well-being in society, but none of us knows whether this information will benefit or burden us in particular. Kitcher’s skillful application of Rawlsian methodology at this juncture makes a real contribution to the public debate. This is especially true when he turns from the relatively easy areas of health or disability insurance to the more vexing area of employment discrimination. Recognizing the perils of allowing employment discrimination on genetic grounds, Kitcher nevertheless entertains a series of circumstances in which genetic discrimination might be permissible as long as it is accompanied by counseling, retraining, and the provision of alternative job opportunities. These include instances of genetic conditions in which symptoms express themselves suddenly with grave consequences for others or conditions whose manifestation and prevention would require enormously expensive environmental modifications in the workplace.

This same combination of good philosophical footing, deep familiarity with the issues, and sound judgment characterizes Kitcher’s treatment of the complex issue of prenatal testing. Fully acknowledging the bad science and the vicious forms of social repression that were prevalent in the early eugenics movement, Kitcher nevertheless argues that we are inescapably involved in making decisions of a eugenic nature. Whether we like it or not, our decisions today will affect the genetic inheritance of future generations. Reacting to earlier genetic abuses, we have developed what he calls a “laissez-faire” form of eugenics in which parents, assisted by nondirective counseling, frequently use available testing technologies to select features of their child’s genetic makeup. For all its value, however, this approach is severely limited by the lack of resources available to provide counseling and other genetic and medical support services to all members of society, as well as by the resultingly uninformed and often harmful decisions (or lack of decisions) made by individual parents and couples.

In place of this laissez-faire eugenics, Kitcher proposes what he calls “utopian eugenics.” Its goals are to bring into the world children whose lives are unrestricted by serious genetic disease and who are assisted to realize the highest possible degree of development. To achieve these goals, utopian eugenics seeks to employ reliable genetic information in prenatal tests that are equally available to all citizens. Widespread public discussion of the value and consequences of individual decisions would proceed without any societally imposed restrictions on individual choice. The emphasis would be on education, not coercion. Just health care arrangements would help reduce the pressures on individuals to bend reproductive decisionmaking to economic necessity. To prevent even public opinion from becoming unduly coercive, “there would be universally shared respect for difference coupled with a public commitment to realizing the potential of all who are born.”

In this connection, Kitcher addresses one of the recurrent concerns of those who object to the growing emphasis on prenatal testing: that the willingness to avoid the birth of children with disabilities will somehow foster increased discrimination against the disabled. Yet on Cyprus, where the Greek Orthodox Church has administered a testing program for thalassemia, Kitcher points out that as the incidence of this disease has diminished, help for those afflicted with it has actually increased. Indeed, Kitcher believes that there is no reason to think that decisions to avoid lives burdened with severe genetic disease should lead to a devaluation of the lives of those who already have these disorders. It is crucial to recognize the distinction between an actual life and a “life in prospect,” because different standards of evaluation apply. Unless this philosophical distinction is understood and appreciated, needless suffering can result.

Kitcher himself acknowledges the fragility of the utopian enterprise he envisions, and many of his readers will not share his confidence that it can be implemented without drifting across the line into a coercive eugenics. This is especially true if Kitcher’s own appeals for universal access to health care are not heeded and freedom of parental choice becomes eclipsed by a desire to reduce health care outlays for costly genetic diseases. Despite these difficulties, Kitcher’s ideas move in the right direction. Given the increasing power that genetic information will confer on parents, including the power to harm their children, we must begin to think about how we can enhance the quality of parental genetic decisionmaking while preserving the freedom of that decisionmaking.

The kind of popular philosophy that Kitcher endeavors to convey in this book has its perils. Here and there, complex issues do not receive the careful and well-annotated treatment one would expect in a scholarly philosophical article. Kitcher’s treatment of the concept of disease, one of the core issues in genetic ethics today, is an example. An adequate concept of disease could help us distinguish between medically indicated genetic interventions able to command wide support and efforts at enhancement genetics that may prove socially divisive or destructive. Kitcher is right to note the serious problems attending many previous efforts to define disease. The concept of “normal (physiological) functioning” is an idea that founders on closer analysis by exhibiting hidden value assumptions that undermine its promise of scientific objectivity.

Despite this, Kitcher is probably too hasty in jettisoning the concept of disease in favor of the notion of “quality of life” as a basis for ethically justifiable genetic decisions. This notion is too broad, as it can legitimize ethically questionable practices such as prenatal sex selection in India, where the anticipated quality of life of females is undeniably poor. Besides, it may not be needed. Some contemporary philosophers have developed definitions of disease that work remarkably well. These definitions, involving a constellation of ideas such as abnormality, endogenous causation, and enhanced risk of suffering death or disability, fit well with many of our established medical judgments and may prove to be reliable guides as we make decisions in the newer realm of genetic disorders.

Experts will always quibble with the details of any effort that moves out of its own specialized field into the broader world of public education and policy formation. Despite this, such education must go on. The Lives to Come is a major effort to bridge a host of fields to provide insight into the promises and challenges of the genetic revolution. The care that has gone into its preparation and the quality of its arguments make it an enduring reference for anyone interested in thinking about where the Genome Project should take us.