In spite of substantial debate and controversy over the effects of indiscriminate across-the-board cuts in the days leading up to the deadline, sequestration went into effect on March 1 as required by law. Cuts to defense and nondefense R&D will total an estimated $9.0 billion from the fiscal year (FY) 2013 federal R&D budget. These cuts will place a particularly acute burden on government agencies, as they must be implemented nearly five months into the fiscal year.

As widely expected, Congress failed to pass a balanced alternative deficit reduction plan to replace the sequester. The House of Representatives, however, did pass an appropriations bill (H.R. 933) that would fund the federal government for the remainder of the 2013 FY. The legislation, which passed 267 to 151, would fund both defense and nondefense R&D at FY 2012 levels, although all R&D would remain subject to sequestration—a roughly 7.8% decrease for defense R&D and a 5.0% decrease for nondefense agency R&D. The House bill was written as an appropriations bill for the Department of Defense (DOD) and Veterans’ Affairs, and as a continuing resolution (CR) for the remaining agencies. This allowed the House to provide some flexibility to DOD and Veterans’ on how each could allocate the sequester cuts.

On March 11, the Senate Appropriations Committee released its revised version of the House bill. Both Appropriations Chairwoman Barbara Mikulski (D-MD) and Ranking Member Richard Shelby (R-AL) agreed to the legislation that would continue to fund the government for the remainder of the FY. The revised “hybrid” bill does not eliminate the sequestration but does expand the House version by including additional flexibility for the Departments of Justice, Homeland Security, Agriculture, and Commerce, as well as NASA and NSF. The bill also includes a small increase (a $71 million, pre-sequestration cut) for the National Institutes of Health. On March 20, the Senate voted 73 to 26 to pass its version of the Continuing Appropriations Act. The act includes an amendment submitted by Sen. Tom Coburn (R-OK) that limits funding for political science research at NSF; specifically, the agency will be able to fund political science research only if it is certified by the NSF director as “promoting national security or the economic interests of the United States.” The next day, the House of Representatives voted 318 to 109 to approve the Senate’s changes.

The White House released its FY 2014 budget request on April 10. The president proposes a $3.8 trillion budget in FY 2014, projecting a $744 billion deficit. In R&D funding, the budget calls for $144.1 billion, including $69.7 billion for basic and applied research. In general terms, the budget shows a marked shift from defense to nondefense R&D, and from development to research. Perhaps most notable for R&D funding, however, is the president’s proposal to roll back sequestration. Provisions in the Budget Control Act currently cap discretionary spending at $966 billion in FY 2014, a level that House Republicans have embraced. However, the president’s budget and Senate Democrats propose returning the discretionary spending limit to the pre-sequester level of $1.057 trillion. Resolving this $91 billion difference is key for R&D funding, as the president’s budget is predicated on the higher spending level. 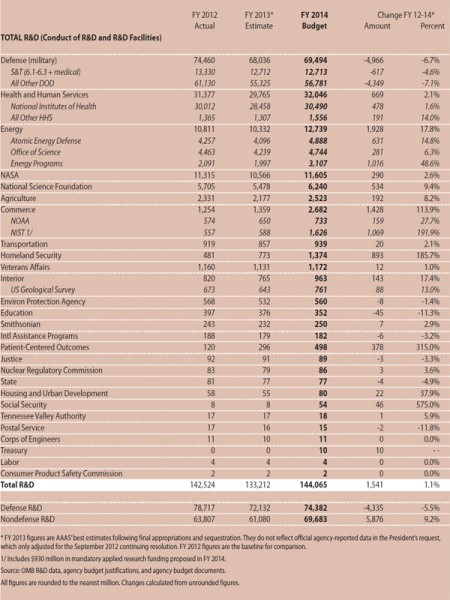 Failing to raise the cap would likely leave FY 2014 looking much like FY 2013, when R&D funding fell by more than $9 billion, or 6.7%, below the prior year, according to American Association for the Advancement of Science estimates. This decline comes on the heels of cuts in prior years, resulting in a three-year R&D decline of roughly 17%, which would be the largest relative decline in federal R&D funding in 40 years. Although some of the reduction in FY 2013 was due to funding cuts in final appropriations, the majority of it was the result of sequestration. Some agencies did appear to fare better than others in the final summation. For instance, NSF, the Department of Homeland Security (DHS), the National Nuclear Security Administration, and the National Institute of Standards and Technology (NIST) all received funding boosts that partially or fully offset sequestration.

Because FY 2013 appropriations came a full six months late, the administration delayed its own FY 2014 request until April. Compared with postsequester FY 2013 estimates, the budget proposes substantial increases across virtually every major agency. Compared with FY 2012 (the last year before sequestration), the budget would boost nondefense R&D spending by 5.2% after inflation and cut defense R&D by 9.5%. The defense cuts are all in the development stage, and research spending would actually increase.

In inflation-adjusted dollars, the administration proposes a combined 4.9% increase above FY 2012 for R&D at the America COMPETES agencies (NSF, NIST, and the Department of Energy’s Office of Science); a 4.2% increase for the Department of Agriculture, including a nearly 50% increase for extramural research; and a neardoubling of the DHS R&D budget for construction of the National Bio- and Agrodefense Facility in Manhattan, Kansas. However, the budget also cuts 2.4% from NIH, 1.4% from NASA, and 5.4% from the Environmental Protection Agency. Many of the key increases are reserved for targeted programs intended to drive technological innovation, including smart systems, materials, and cyberinfrastructure research at NSF; the Space Technology mission at NASA; the Clean Energy Manufacturing Initiative at the Department of Energy; and the National Center for Advancing Translational Science within NIH. DOD’s R&D budget would decline substantially, although basic research funding would increase.

Although the budget continues to make investments in the administration’s priority research areas, the overriding question is whether Congress can agree to a deal that raises the discretionary spending ceiling to make the president’s budget work. Barring an agreement, FY 2014 would end up looking similar to FY 2013, with billions of dollars in lost R&D falling victim to the nation’s fiscal challenges.

The Obama administration has proposed a reorganization of science, technology, engineering, and math (STEM) education programs in what it says is an effort to more efficiently manage the $3 million that the federal government spends each year on science education, public outreach, and training programs for new scientists and engineers.

The president’s FY 2014 budget outlines a plan for reducing the number of active STEM programs from 226 to 112; 78 programs would be eliminated altogether, and 49 would be consolidated. The consolidated programs would be run under the auspices of one of three agencies: the Department of Education would manage precollege science and math education programs, NSF would manage undergraduate and graduate STEM training, and the Smithsonian Institution would manage any extracurricular STEM activities.

Although there would be budget cuts for specific agencies that would lose their STEM programs—most notably NASA, NIH, and the National Oceanic and Atmospheric Administration— the budget calls for a $3.1 billion investment in STEM education programs, a 6.7% increase from FY 2012 levels. The Department of Education alone would receive a 4.6% increase from FY 2012 levels to fund, among other things, a new Master STEM Teacher Corps Initiative and the STEM Teacher Pathways program, which was designed to prepare 100,000 new STEM teachers for the workforce in the next 10 years.

This proposal comes in the wake of a 2012 General Accounting Office (GAO) report that found that 83% of federally managed STEM programs overlapped to some extent, but less than half of these programs were coordinated with other agencies. The GAO also reported that agencies were not evaluating the success of their programs adequately.

“From the Hill” is adapted from the newsletter Science and Technology in Congress, published by the Office of Government Relations of the American Association for the Advancement of Science (www.aaas.org) in Washington, DC.

On April 2, the White House announced that $100 million in its FY 2014 budget proposals would be designated for a new research initiative focused on the human brain. The Brain Research through Advancing Innovative Neurotechnologies (BRAIN) Initiative would include research investments from NIH, the Defense Advanced Research Projects Agency, and NSF, as well as public/private partnerships.