The Sun, the Genome, & the Internet: Tools of Scientific Revolutions

Speculating about humanity’s future has become a fairly dreary business of late. Although there are many attempts to sketch landscapes for the coming millennium, the pictures generated are typically stiff and lifeless. In countless books and news stories on the year 2000, the basic assumption is that the future will simply be an endless string of technological breakthroughs to which humanity will somehow adapt. Yes, there will be powerful new forms of communication, computing, transit, medicine, and the like. As people reshape their living patterns, using the market to express incremental choices, new social and cultural forms will emerge. End of story. 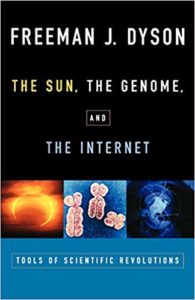 Strangely missing from such gadget-oriented futurism is any sense of higher principle or purpose. In contrast, ideas for a new industrial society that inspired thinkers in the 19th and early 20th centuries were brashly idealistic. Theorists and planners often upheld human equality as a central commitment, proposing structures of community life that matched this goal and seeking an appropriate mix of city and country, manufacturing and agriculture, solidarity and freedom. In this way of thinking, philosophical arguments came first and only later the choice of instruments. On that basis, the likes of Robert Owen, Charles Fourier, Charlotte Perkins Gilman, Ebenezer Howard, and Frank Lloyd Wright offered grand schemes for a society deliberately transformed, all in quest of a grand ideal.

As one of today’s leading post-utopian futurists, Freeman J. Dyson places technological devices at the forefront of thinking about the future. “New technologies,” he says, “offer us real opportunities for making the world a happier place.” Although he recognizes that social, economic, and political influences have much to do with how new technologies are applied, he says that he emphasizes technology “because that is where I come from.” In that vein his book sets out to imagine an appealing future predicated on technologies identified in its title: The Sun, the Genome, & the Internet.

The project is somewhat clouded by the fact that he has made similar attempts in the past with limited success. Infinite in All Directions, published in 1985, upheld genetic engineering, artificial intelligence, and space travel as the truly promising sources of change in our civilization. Now, with disarming honesty, he admits that two of these guesses were badly mistaken and have been removed from his hot list. “In the short run, he concludes, “space travel is a joke. We look at the bewildered cosmonauts struggling to survive in the Mir space station.” By the same token, artificial intelligence has been a tremendous disappointment. “Robots,” he laments, “are not noticeably smarter today than the were fourteen years ago.” From his earlier crystal ball, only genetic engineering still holds much luster. Evidently, Yogi Berra’s famous maxim holds true: “It’s tough to make predictions, especially when you’re talking about the future.”

What makes solar energy, biotechnology, and the Internet appealing to Dyson is that they translate ingenious science into material well-being; sources of wealth that, he believes, will now be more widely distributed than ever before. Because sunlight is abundant in places where energy is now most needed, improvements in photovoltaic systems will bring electric power to isolated Third World villages. Soon the development of genetically modified plants will offer bountiful supplies of both food and cheap fuel, relieving age-old conditions of scarcity. As the Internet expands to become a universal utility, the world’s resources of information and problem solving will finally be accessible to everyone on the planet. Interacting in ways that multiply their overall benefit, the three developments will lead to an era of prosperity, peace, and contentment. The book’s most lively sections are ones that identify avenues of research likely to bear fruit in decades and even centuries ahead. Of particular fascination to Dyson are instruments that were initially created for narrow programs of scientific inquiry (John Randall’s equipment for X-ray crystallography, for example) but have a wide range of beneficial applications. Occasionally he goes so far as to suggest currently feasible but yet unrealized devices that scientists should be busy making. Both the desktop sequencer and desktop protein microscope, he insists, are among the inventions that await someone’s creative hand.

Alas, the charming vitality of Dyson’s techno-scientific imagination is not matched by a thoughtful grasp of human problems. News has reached him that there remain people in the world who, despite two centuries of rapid scientific and technological progress, remain desperately poor. He worries about the plight of the world’s downtrodden and urgently hopes that coming applications of science will turn things around. Unfortunately, nothing in the book shows any knowledge of the actual conditions of grinding poverty that confront a quarter of the world’s populace. Neither does he seem aware of the voluminous research by social scientists–Nobel Prize winner Amartya Sen for one–that explain how deeply entrenched patterns of inequality persist generation after generation, despite technological and economic advance. Emblematic of Dyson’s unwillingness to tackle these matters is his chapter on “Technology and Social Justice,” which offers neither a definition of social justice nor even a rudimentary account of alternative political philosophies that might shed light on the question.

The slapdash quality of the book’s social analysis sometimes leads to ludicrous conclusions. In one passage, Dyson surveys the 20th-century history of the introduction of electric appliances to the modern home. In the early decades of this century, he notes, even middle-class families would hire servants to handle much of the housework. With the coming of labor-saving appliances, however, the servants were sent packing and housewives began to do most of the cooking and cleaning. Up to this point, Dyson’s account is pretty much in line with standard histories of domestic work. But then his version of events takes a bizarre turn.

He recalls that middle-class women of his mother’s generation, supported by crews of servants, were sometimes able to leave the home to engage in many varieties of creative work. One such woman was the distinguished archeologist Hetty Goldman, appointed to Princeton’s Institute for Advanced Study in the 1930s. But for the next half-century until 1985, he laments, the institute hired no other women at all. “It seemed that there was nobody of her preeminence in the next generation of women,” he writes. What accounts for this astonishing setback in the fortunes of women within the highest levels of the scientific community? Dyson concludes that it must have been the coming of household appliances. No longer supported by servants, women were chained to their ovens, dishwashers, and toasters and were no longer able produce those “preeminent” contributions to human knowledge they so cherish at the institute. “The history of our faculty encapsulates the history of women’s liberation,” he observes without a hint of irony, “a glorious beginning in the 1920s, a great backsliding in the 1950s, a gradual recovery in the 1980s and 1990s.” Are there other possible explanations for this yawning gap? The sexism of the old boys’ club perhaps? Dyson does not bother to ask.

The shortcomings in Dyson’s grasp of social reality cast a shadow on his map of a glorious tomorrow. His book shows little recognition of the political and economic institutions that shape new technologies: forces that will have a major bearing on the very improvements he recommends. In recent decades, for example, choices in solar electricity have been strongly influenced by multinational energy firms with highly diverse investment agendas. In corporate portfolios, the sun is merely one of a number of potential profit centers and by no means the one business interests place at the top of the list. Before one boldly predicts the advent of a solar age, one must understand not only the technological horizons but also the agendas of powerful decisionmakers and the economic barriers they pose. Similarly, the emerging horizons of biotechnology are, to a great extent, managed by large firms in the chemical and pharmaceutical industries. When compared to the product development and marketing schemes of the corporate giants, Dyson’s vision of an egalitarian global society nourished by genetically modified organisms has little credibility. He seems oblivious to a growing resistance to biotechnology among some of the farmers in Third World countries, a revolt against the monopolies that genetically engineered seed stocks might impose.

Occasionally, Dyson notices with apparent surprise that promising innovations are not working out as expected. “Too much of technology today,” he laments, “is making toys for the rich.” His solution to this problem is technology “guided by ethics,” an excellent suggestion, indeed. Once again, however, he does not explain what ethics of this kind would involve. Rather than argue a clear position in moral philosophy, the book regales readers with vague yearnings for a better world.

Some of Dyson’s own deepest yearnings emerge in the last chapter, “The High Road,” where he muses about manned space travel in the very long term. Eventually, he argues, there will be low-cost methods for launching space vehicles and for establishing colonies on distant planets, moons, asteroids, and comets. But the key to success will have less to do with the engineering of spaceships than with the reengineering of the genomes of living things. In another 100 years or so, we will have learned how to produce warm-blooded plants that could survive in chilly places such as the Kuiper Belt comets outside the orbit of Neptune. More important, in centuries to come humanity itself will divide into several distinct species through the wonders of reprogenic technology. Of course, this will create problems; the separate varieties of human beings are likely to hate each others’ differences and wage war on one another. “Sooner or later, the tensions between diverging ways of life must be relieved by emigration, some of us finding new places away from the Earth while others stay behind.”

At this rapturous moment Dyson begins to use the pronoun “we,” clearly identifying himself with the superior, privileged creatures yet to be manufactured. “In the end we must travel the high road into space, to find new worlds to match our new capabilities. To give us room to explore the varieties of mind and body into which our genome can evolve, one planet is not enough.”

I put the book down. I pondered my response to its bizarre final proposal. Should we say a fond “Farewell!” as Dyson’s successors rocket off to the Kuiper Belt? I think not. A more appropriate valediction would be “Good riddance.”