Salmon Without Rivers: A History of the Pacific Salmon Crisis 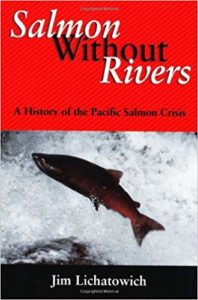 The coast-wide decline of Pacific salmon is in some respects a familiar story. The basic plot–the advance of development, the loss of habitat, and the emergence of an endangered species crisis–is, unfortunately, anything but novel. The story Jim Lichatowich tells in Salmon Without Rivers, however, has a twist. Accompanying the loss of wild rivers and salmon was the growth of salmon “management,” rooted in the idea that hatcheries and other technologies could produce salmon as well as or better than nature could. Salmon Without Rivers is a history of the marriage of convenience between development and U.S. salmon management. It is also a moral commentary. In recounting this history, Lichatowich has much to say about the human assumptions that have enmeshed salmon, especially the convenient idea that technology will free us from having to choose between a rich natural world and unconstrained development.

The book’s appearance is timely. To judge from the number of recent major articles and full-page ads in the New York Times, the Northwest’s salmon problems are headed for a national stage. If that is the case, Jim Lichatowich is a first-rate guide. He is a rarity: a serious-minded scientist who writes clearly. Salmon Without Rivers is thoughtful, readable, and textured, although not the history of a detached academic. Lichatowich, a fisheries biologist and consultant, has been at the center of much of the salmon debate over the decades, and he continues to play a major role in shaping the scientific context in which the policy debate occurs. His passion for wild salmon, rooted in a scientific perspective, is apparent in the ethical voice that infuses his view of history.

Lichatowich’s story sweeps broadly. It starts with the region’s geology, the collision of plates, the eruptions, the ebb and flow of ice sheets, and the succession of floods. About two million years ago, salmon laid their first eggs in the fragile landscape that emerged from these phenomena. When the Northwest climate shifted to a cool, moist pattern, salmon spread thickly into rivers. In the years between then and now, salmon adapted genetically to the unique conditions of their natal streams, so that by the middle of the 19th century, the Northwest and salmon were warp and weft in an intricate fabric.

The Northwest native salmon culture sets a tone for the moral issues that underlie much of the story. Lichatowich tells of the native gift culture and its relation to the idea that plants, fish, animals, and rocks are entitled to equal respect. Gift-giving through potlatches and other practices fueled the native economy and culture, creating a cycle of reciprocal obligations. The equality of humans and other species meant that these obligations crossed species lines. Salmon allowed themselves to be taken, and humans assumed obligations in return. Even today, Northwest Indians greet the season’s first salmon with ceremony, another link in the long and valued exchange of life, gratitude, and respect between species.

The middle part of the book covers the advent of non-Indians and industrial values. Those who like to think of the 19th century as a simpler, less grasping world will find little support here. The first step in commercializing the landscape was characteristic: The Hudson’s Bay Company nearly wiped out beavers in order to preempt U.S. trappers and incidentally worked profound changes in the ecology of Northwest watersheds. The hammer blows of 19th century development–mining (rivers and valleys buried under tons of hydraulic mining runoff); timber harvest (streams jammed with logs, chips, and sawdust, blasted loose with dynamite, devastating stream channels); grazing (riparian areas stripped of vegetation and eroded, channels down-cut, water tables sunk); irrigation (streams dried up and salmon diverted into fields); fishing (stocks depleted as technology improved and markets expanded); and dams (hundreds of them block or obstruct fish migration)–threw salmon into decline by the early part of this century.

Although habitat protection would have been a likely response to the declines, a different choice was made. The 19th-century U.S. Commission on Fish and Fisheries proposed that Columbia River fish be artificially hatched, obviating the need to protect fish and habitat with laws that were no more welcome in the 1880s than they are today. Fish managers blocked salmon streams to harvest eggs from salmon and ship them to other rivers. Salmon began hatching in rivers where their genetic strategies for survival were strangely out of phase.

Hatcheries produced disappointing returns. In Lichatowich’s analysis, the growth of the hatchery program harmed the wild runs while actually accelerating the decline of the salmon harvest. At first there was little criticism, but by the 1930s, a sustained chorus demanded scientific evaluation of hatcheries. At this point, another fork in the road emerged, and Lichatowich asks us to consider the road not taken. Scientific doubts about hatcheries were increasing, and new insights into salmon biology were emerging. The time seemed ripe for a shift back to an ecological approach to salmon conservation.

It didn’t happen. The Great Depression and the New Deal propelled the Columbia River and its watersheds into a new development era. Massive hydropower dams inundated or blocked what were until then the least-developed parts of the salmon ecosystem: the long stretches of spawning and rearing habitat in the river’s main stem. After World War II, timber harvesting boomed and more land was put under irrigation. Despite a contrary scientific consensus, Lichatowich says, fisheries managers continued to believe that hatcheries would make salmon compatible with fully developed rivers and degraded ecosystems.

Lichatowich’s perspective on the current trend is summed up in the title of one of the book’s closing chapters, “The Road to Extinction.” Salmon are now extinct in almost 40 percent of the rivers in which they once spawned, and the subtlety and pervasiveness of the causes of decline have set the stage for a tense and confused political debate. It is a debate, however, that the author chooses not to engage, at least in this book. For example, the book does not cover what has for several years been at the center of the Columbia River salmon controversy: the proposal to breach four major federal dams on the lower Snake River.

The book does, however, make an argument that is central to the current controversy: the hopelessness of basing a conservation strategy on technology and in particular on hatcheries. Because Salmon Without Rivers makes this argument so directly, I wonder about the wisdom of omitting the counterargument, made most vocally by the modern-day Indian tribes that take a bitter view of the antihatchery perspective. Tribes have witnessed the eclipse of their gift-giving relationship with salmon by commercial values, the conversion of salmon and their ecosystem into market commodities, and the disappearance of tribal fisheries while non-Indians harvest hatchery salmon. Faced with these realities, tribes want hatcheries that feed tribal harvests–better hatcheries to be sure, managed with more sensitivity to salmon ecology–but hatcheries all the same. They have no faith that a culture with little history of valuing salmon and prone to trim scientific information to fit political needs will join the ecological school of salmon conservation. In this they have something in common with the non-Indian scientist-bureaucrats of the 19th century, who judged that protective laws could not be enforced “except at very great expense and with much ill feeling.” If protective laws are impractical and hatcheries are the coin of the realm, tribes demand hatcheries over the bare hope of conservation reform. In choosing not to address this aspect of the debate, Salmon Without Rivers misses an opportunity to test the book’s central theme against an intractable issue and to illustrate the moral ambiguity of the debate.

Lichatowich’s rejoinder might lie in the chapter, “A Story of Two Rivers,” which compares the Columbia’s history to that of its sister to the north, British Columbia’s Fraser River. The lesson of the chapter is that the nonecological approach taken with the Columbia River was not inevitable. Both the Fraser and the Columbia were major salmon rivers, and both were in decline by the 1920s. In contrast to the actions taken with the Columbia, fisheries managers on the Fraser paid close attention to emerging biological science and made a commitment to protect the river’s natural capacity to produce salmon. This reliance on natural systems rather than a system dominated by hatcheries led to different futures for the Fraser and the Columbia. The Fraser’s dams are located on upper tributaries that are beyond the limits of the salmon migration; the river’s main stem flows free. Today, while salmon are struggling on the Columbia, the Fraser runs are booming.

Lichatowich attributes this difference in large part to the Canadians’ willingness to listen to science, which in his view leads inexorably to an ecological approach to salmon management. But he points out that the Columbia’s problems also stem from the complexity and fragmentation of its governance. University of Colorado law professor Charles Wilkinson once traced a migrating salmon through 17 different management jurisdictions, and he didn’t bother to count the various agencies and owners who control the land and water in the salmon’s freshwater ecosystem. The accumulation of overlapping and competing authorities contributes to the Columbia’s reputation as a kind of black hole in natural resource policy.

In contrast, the Fraser’s keepers chose centralized governance. The International Pacific Salmon Fisheries Commission, which began its work on the Fraser in 1937, fostered a common vision, proved more willing to use science, and paid attention to the answers. The still small voice of science managed to trump the technological imperative.

Salmon Without Rivers brings depth, insight, and readability to a timely subject. In the end, Lichatowich, like other good historians, offers lessons on the issues of the day. He tells us that the stories we tell ourselves about the world guide our behavior and have real consequences. He urges us to pay attention to these stories, to build institutions that can perceive their consequences, and to remember that ultimately we cannot leave decisions about what is right and beautiful to science. For Lichatowich, what is right and beautiful is a cool stream running with salmon.