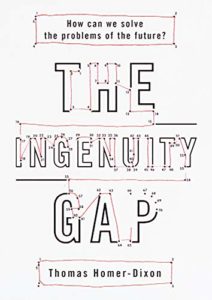 The Ingenuity Gap is about how to worry efficiently in the 21st century. Most people worry inefficiently, either with undifferentiated anxiety about an unknown future or with hypomania about unprioritized details. This book focuses on what’s going right and is likely to get better in the future–science and technology–and on what’s likely to be the fulcrum of our weaknesses–social systems.

In presenting his argument, Thomas Homer-Dixon takes the reader from prehistory to 2100, from a small street in Patna, India, to the boardrooms of international organizations. He weaves together unrelated disciplines from archeobiology to economics. And in the process he sifts the wheat from the chaff of our anxieties.

Homer-Dixon is a Canadian political scientist whose previous research dealt with environmental problems and conflict. As a social scientist, he unsurprisingly defines some of the major 21st-century issues as human and social behavior. But it is unsettling that he lacks confidence that the behavioral and social sciences can solve the problems the book outlines.

The book begins with a gripping account of a passenger jet whose hydraulic systems had failed at 40,000 feet. Without the ability to control the rudder, the plane with its 296 passengers seemed destined to crash catastrophically. The cockpit recorder captured the voices of the crew as they tried to relearn how to fly a plane by varying the power in the engines. The engineers on the ground could offer no help in such a radical technical failure. After 44 harrowing minutes, the ingenuity of the crew brought the plane down at the Sioux City airport and saved the lives of 185 passengers. When experts tried later with the help of a flight simulator to figure out what the crew could have done better, they were unable to create a scenario in which any passengers survived. This incident is a powerful example of extraordinary human ingenuity solving a technological disaster.

The book returns repeatedly to an appreciation of human ingenuity. Homer-Dixon safely predicts that human ingenuity will continue to make technological and scientific advances in a range of fields, including genetics, materials engineering, computation, and nanotechnology. But he also predicts that scientific and technological ingenuity will not be enough for the 21st century. Humanity’s fine-tuned ability to adjust to local situations that change gradually will be challenged when the changes are increasingly rapid and global.

The passenger plane that suddenly lost its hydraulic systems is only the first of many examples in the book of the kind of situation that will increase the demands on human ingenuity in the future. Other examples include the 1987 stock market crash and the more recent upheaval in Asian financial markets. Homer-Dixon also expects a growing number of environmental surprises, such as the collapse of the Peruvian anchovy harvest in Peru in the 1970s and of the New England cod harvest in the late 1980s and early 1990s.

What all of these examples have in common is their unpredictability. They represent complex, nonlinear, dynamical systems that are difficult to understand and manage successfully. Homer-Dixon assumes, as do many others, that the increasing globalization of human activities and the increasing velocity of information flow are likely to make unpredictable crises more common in the 21st century than they were in the 20th. And these new global crises will present more complex conundrums than human ingenuity has faced in the past.

Are we smart enough?

Will we have the ingenuity to solve the nonlinear, dynamical problems that we’ll face in the next 100 years? In order to answer this question, Homer-Dixon begins with recent research in neurobiology, paleoanthropology, and evolutionary psychology. He selectively summarizes theories about how the human brain evolved, why it is so flexible, and how it interacts with the cultural evolution of Homo sapiens. These theories suggest that our ingenuity evolved to solve problems and to adjust to new situations, especially in local environments.

The central question of this book is not whether humans have the scientific and technical ingenuity to solve the 21st-century challenges. Homer-Dixon and many others assume that we will. His contribution to the public debate about the future is to distinguish social from technical and scientific ingenuity. And it is social ingenuity that he thinks will be in short supply in the future.

Social ingenuity includes solving collective action problems, developing rules of governance, and creating flexible institutions for economic transitions. Countries with the best institutions and flexible policies consistently achieve much more of their technological and scientific potential than those with dysfunctional institutions, norms, and policies. But are we smart enough to promote the former and reform the latter?

If Homer-Dixon is right about the need for more social ingenuity, then the social sciences should be critical in the 21st century. But he is not sanguine that these “blunt tools” will be good enough. A depressing example is the Central Intelligence Agency’s State Failure Task Force that was created at the request of former Vice President Al Gore to develop predictors of civil violence. Tidal waves of data were assembled and analyzed by teams of researchers over thousands of hours. The Task Force identified three indicators that a country was vulnerable to “national state failure”: little international trade, high infant mortality rates, and low levels of democracy. Of the 161 countries in the study, most would be correctly identified by these three variables as stable. These variables would also generate two out of the three true alarms. But the true alarms were buried in the 50 false alarms. The high false positive rates from these predictors unfortunately raise questions about our ability to understand the social and political crises of recent human history.

Many social scientists underappreciate the complexity of the phenomena they are studying, which makes them bold about causality and casual about solutions. Homer-Dixon does acknowledge the insights of a few scholars, such as Elinor Ostrom’s work on public management of the commons and Douglas North’s research on institutions. But he argues that social science research is a long way from developing the intellectual traction of accumulating results that will eventually contribute to the development of new kinds of social ingenuity.

The dilemmas raised by a social ingenuity gap are also being raised by other groups. A recent National Academy of Sciences report entitled Our Common Journey concludes that “a global transition could be achieved . . . what will be required, however are significant advances in basic knowledge, in the social capacity and technological capabilities to utilize it, and in the political will to turn this knowledge and know-how into action.” Fifteen national scientific academies recently identified “improving the capacity of societies to use knowledge” as one of the 10 challenges for the 21st century. And Kofi Annan, at the United Nations (UN) Millennium Summit, said, “If we are to capture the promises of globalization while managing its adverse effects, we must learn to govern better, and we must learn how better to govern together.” But none of the groups said how the “social gap” should be filled.

Homer-Dixon also seemed to run out of energy or imagination when he reached the recommendations section. He stresses that every ingenuity gap can be bridged by reducing the demand for new ingenuity to solve problems and by increasing the supply of ingenuity. In order to increase the supply, he suggests that governments need to dramatically increase funding for science, especially in areas such as energy and agriculture. He also recommends the reform of international organizations such as the International Monetary Fund and UN to improve the international financial system and establish an international rapid reaction force. But curiously, he doesn’t suggest increased funding for research on social ingenuity to better understand how to promote it. He also doesn’t suggest improving education around the world, which could be the critical foundation for supplying better ingenuity of all kinds.

Homer-Dixon rightly points out that reducing the demand for ingenuity is harder than increasing the supply, because it would require basic changes in human behavior. In order to reduce the demand for more ingenuity, Homer-Dixon recommends that people reexamine their own values. This would require reassessing our environmental consumption norms as well as our self-image in a globalizing society. But he doesn’t say what would have to be done to make it happen. What is curious is how underspecified these recommendations are for the ingenuity gaps that took 400 pages to describe.

Ironically, this book is one convincing piece of evidence that we may, in fact, have enough ingenuity to address our 21st-century challenges. If a critical step is worrying efficiently by getting the question right, then Homer-Dixon has demonstrated our ability as a species to do that. His next book, however, needs to be entitled How to Fill the Social Ingenuity Gap. And he needs to start writing now.