The Lessons of J. Robert Oppenheimer

Robert Oppenheimer: A Life Inside the Center 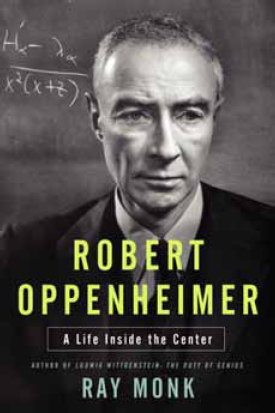 “Whatever the enemy may be planning, American science will be equal to the challenge.”

A commonplace of national security debates is that science, supported by the state, is the first and last line of defense against our enemies.

Science was not always understood in this light. Franklin Delano Roosevelt’s words to J. Robert Oppenheimer, quoted above, were meant to be motivational, not prophetic. Some 75 years before drones ruled the skies and the National Security Agency’s digital panopticon mapped the interactions between suspiciously menacing characters around the planet, U.S. science first began to thrive on the margins of military power. World War II altered irrevocably the status of science as a public good, and nothing revolutionized the scientific equation more than the race to build the first atomic bombs.

A race in name only, as the United States proved to be the sole serious contender. Under the skillful leadership of Oppenheimer, a brilliant young physicist plucked from obscurity by the Roosevelt administration during the most dangerous months of the war against Germany and Japan, the Manhattan Project provided a stunning example of the power of bringing together the world’s biggest brains in pursuit of a winning weapon. When in July 1945, in the deserts of New Mexico, the Manhattan leadership witnessed the first atomic explosion, the nature of power in human civilization, and the role of science in delivering that power, had changed forever.

For many scientists, especially physicists, the new terms of their existence proved intoxicating. Lionized as a saviors by the mass media, criticized as the “new priesthood” by renegades such as Ralph Lapp (himself a physicist), scientists were showered with money and wooed by the military and political establishments after World War II. And Oppenheimer emerged as a luminary of almost blinding power. Chair of the government’s secret committee on the future of nuclear weapons development, he lived and worked at the center of science’s new power.

By the late 1940s, however, the unanimity within the U.S. political elite, so crucial to defeating Germany and Japan in war, began cracking in the cold peace that ensued. President Roosevelt had maintained a stiff but effective alliance with “Uncle Joe” Stalin’s Soviet Union. Harry Truman, who inherited the presidency on FDR’s death, could not contain the rampant suspicions of the Soviet Union. Pivotal figures, including Oppenheimer, advised against automatically taking the arms race to the next level: from atomic to hydrogen bombs. This Oppenheimer wing wanted to test the capacity of the Soviet Union and the United States. to reach an accord on arms control, before dramatically escalating the power of nuclear weapons.

Oppenheimer wasn’t alone in advancing this position. Vannevar Bush, who as director of the wartime Office of Scientific Research and Development was Oppenheimer’s ultimate boss on the Manhattan Project, and James Conant, Bush’s chief assistant and president of Harvard from 1933 to 1953, also pressed the U.S. government to defer the testing of H bombs until a deal with Soviet Union to ban them was fully explored. Bush went so far as to join in a failed private campaign to delay, or cancel, the first test of an H bomb, scheduled by President Truman only days before a national election for his successor, won by Dwight Eisenhower. Bush complained that Truman, a lame duck, had robbed the incoming president of the chance to say yea or nay to the H bomb, describing the test as a “point of no return” in the escalating arms race with the Soviet Union.

Yet Oppenheimer alone suffered the humiliation of losing his security clearance in a tortured 1953 secret hearing of the Atomic Energy Commission that he could have avoided by simply resigning from a government post whose term was expiring anyway.

The question of why Oppenheimer suffered such grievous political penal- ties—and why his suffering mattered to so many important scientists—has been explored by some of the finest historians the United States has ever produced and by many of Oppenheimer’s contemporaries in physics, perhaps most notably I. I. Rabi. Within months of Oppenheimer’s death, Rabi led an extraordinary memorial gathering in which he described the enigmatic source of Oppenheimer’s powers both as a physicist and a leader. Not only did he seem capable of discovering, Rabi said, “everything worth discovering,” he had an effect on his fellow men that today is a trait present in every rock star and uber-celebrity and which Rabi, who knew Oppenheimer as well as anyone ever did, could only describe as “this spiritual quality, this refinement expressed in speech and manner, that was the basis of his charisma.”

Rabi added, “He always left a feeling that there were depths of sensibility and insight not yet revealed. These may be the qualities of the born leader who seems to have reserves of uncommitted strength.”

That the term charisma, an attribute that has come to be essential to the contemporary lingo of celebrity, could be applied to Oppenheimer wasn’t pulled out of thin air by Rabi. Not by any means. Max Weber, the German sociologist and an early analyst of the scientist as social actor, introduced the term to explain the “gift of grace” that some intellectuals appeared to possess. As Charles Thorpe, an Oppenheimer biographer and a lecturer in science and technology studies at University College, London, has explained, “Weber described charisma as a revolutionary force, fundamentally opposed to any form of institutional routine, and especially to bureaucratic organization.” Almost as if he had Oppenheimer in mind, although writing before World War II, Weber observed in his essay, “The Sociology of Charismatic Authority”: “The charismatic structure knows no regulated ‘career,’ ’advancement,’’ salary,’ or regulated or expert training.” A self-styled manager and an independent, often contradictory advocate, Oppenheimer seemingly embodied a Weberian vision of a new kind of existential intellectual.

Oppenheimer’s undeniable charisma anchored his outsized influence on his peers. He stood both inside the center of power and outside of its institutional constraints. He was a kind of Nietzschean Übermensch who in the face of the increasing bureaucratization of science and military affairs could on the one hand celebrate the creation of a new weapon of terrible power and at the same time tell a president (as he did Truman), “Mr. President, I have blood on my hands.” And which physicist besides Oppenheimer, in the wake of Hiroshima, could have told his glorified colleagues that “the physicists have known sin”?

Because of Oppenheimer’s charisma and his unusual ability to straddle worlds both artistic and scientific, what Herb York, in his classic memoir The Advisors, describes as the dispute between “hawks” and “superhawks” made Oppenheimer (whom York rightly calls a hawk) a high-value target for the superhawks. Edward Teller, the chief promoter of the H bomb in the early 1950s, and Lewis Strauss, chair of the Atomic Energy Commission and Teller’s political guardian, concluded that the shortest path to destroying the widespread opposition to unqualified development of the H bomb by the United States was to destroy Oppenheimer. They did. That Oppenheimer assisted his opponents by arrogantly dissembling about some of his minor, however dubious, actions to obscure his personal ties to members of the U.S. Communist Party made his defeat all the more frustrating to his friends, who also suffered political marginalization, if less publicly.

The whole saga is told expertly in the Pulitzer Prize-winning 2005 biography of Oppenheimer by Martin Sherwin and Kai Bird. The ambiguities of Oppenheimer’s personal morality were plumbed by S. S. Schweber, a theoretical physicist turned historian of science, in his In the Shadow of the Bomb, published in 2000. The entire mesmerizing transcript of Oppenheimer’s security hearing has long been available. And for those who want to learn more about scientists as tools of the state and the state as a tool of science, Thorpe’s Oppenheimer: the Tragic Intellect, published in 2006, offers rich rewards.

So what does Ray Monk’s new biographical tome—Robert Oppenheimer: A Life Inside the Center —add to the enormous literature on this talismanic subject? Not much, actually. Monk, a British philosopher and the author of a monumental biography of Ludwig Wittgenstein and another such study of Bertrand Russell, writes as if he’s learned recent U.S. history on the fly; his grasp of the role of science in U.S. society is no better. A professor of philosophy at the University of Southampton, Monk insists he wants to rescue from obscurity Oppenheimer’s formidable achievements in physics, chiefly arising from his pre-war work, even while conceding that Oppenheimer was no Einstein.

Neither was he a Heisenberg or a Niels Bohr. Undeniably, Oppenheimer endlessly fascinates people because of his terrible gift for managing the making of the atomic bomb, and for his peculiar political demise in the 1950s. Monk isn’t original on Oppenheimer’s fall from grace but neither is he wrong. Oppenheimer’s exile from power often is compared to Galileo’s brutal brush with Church authorities who insisted he recant his scientific judgments. Yet Oppenheimer never faced this sad choice, between choosing truth or acceptance by the powerful, because he always defended the decision to both build the atomic bomb and to use it. “We had great cause to do it,” Monk quotes Oppenheimer as telling CBS News in 1965, on the 20th anniversary of the bomb.

In this same interview, Oppenheimer said that building weapons of mass destruction was “not the natural business of the scientist.” But it was Oppenheimer’s business—and ever since 1945, the business of science or, more precisely, one in the portfolio of core activities.

When Oppenheimer’s boss Vannevar Bush published a collection of essays in 1967, the year of Oppenheimer’s death, he entitled the book, Science is Not Enough. Bush was explicitly referring to the limits of rational knowledge, to the importance of recognizing that science settles some matters of the human experience, but not others. He was also implying that scientists could not work effectively without partnerships with policymakers and politicians. Oppenheimer, ever enigmatic and aloof, might have always been the smartest guy in the room, but he mismanaged his relationships with the political and policy spheres. Usually presented as a tragedy, Oppenheimer’s story is more clearly viewed today as a cautionary tale about hubris and the role of the intellect in the world of the heart.