By Albert A. Harrison 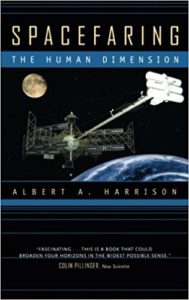 The scope of this book befits its subject. It ranges from the mechanics of human spaceflight to the prospects for colonizing the solar system. At one end of that spectrum are chapters on life support systems, habitability, and group dynamics aboard spacecraft; at the other end, space tourism, settlements, and interstellar migration. The former topics have some empirical base; the latter reside somewhere between futurology and science fiction. The author bestrides the spectrum.

Albert Harrison is professor of psychology at the University of California, Davis. His previous books, including one commissioned by the National Aeronautics and Space Administration (NASA), have addressed long-duration spaceflight and extraterrestrial life. He is a regent of United Societies in Space, an organization promoting human space exploration, and a director of CONTACT, which describes itself as a conference that “brings together . . . social and space scientists, science fiction writers and artists to exchange ideas, stimulate new perspectives and encourage serious, creative speculation about humanity’s future . . . onworld and offworld.”

Harrison clearly believes that humans are destined to explore and settle at least our solar system, if not beyond. He advocates “progress” toward that end. But he stops short of the hyperbolic rhetoric of so many space enthusiasts, quoting them at times but declining to embrace their “wishfulness and optimism.” The result is an informed and upbeat appraisal of the human dimension of spaceflight, coupled with a cautious and wistful rumination on its prospects.

The book moves generally from empirical evidence about human activity in space to projections of what future missions to Mars and other colonization sites might look like. But observations on truly long-term spaceflight are scattered throughout the text–extrapolations of current knowledge into possible future applications. The text also abounds in analogies from maritime studies and arctic exploration. It appears that both the United States and the Soviet Union/Russia have been less than diligent in studying human adaptation to spaceflight. In many areas, therefore, recourse must be had to studies of humans on submarines, polar outposts, and other sites of prolonged confinement and adversity. Harrison uses these sources to good effect, but the dearth of firsthand studies on long-duration space flight leaves one wondering what those astronauts and cosmonauts have been doing up there all these years.

The book abounds in home truths for those who believe that human habitation of space is easy and proximate. “Outer space is lethal and improvident,” Harrison writes. Living and working there is dangerous and bad for your health. Space adaptation syndrome, for example, causes infrequent but sudden vomiting that afflicts 60 to 70 percent of astronauts on their first flights. Its symptoms also include disorientation, pallor, malaise, motivation loss, irritability, and drowsiness.

The physical demands, dangers, and discomforts of spaceflight multiply as Harrison’s book proceeds. Spacefarers must deal with cosmic, solar, and human-made radiation, and shielding to protect the crew adds weight that limits the capabilities of their spacecraft. Prolonged weightlessness depletes blood plasma, body water, and calcium. The water, of course, can be replaced, but on long-duration missions this requires stringent recycling of all water, including urine. Muscles shrink in low gravity, giving up both strength and resistance to fatigue. Twitching and loss of fine motor control may result, and the effects appear to be cumulative.

Astronauts are asked repeatedly about elimination of human waste in space. Urination, it turns out, is relatively simple and tidy. But Harrison makes clear why astronauts are less likely to be forthcoming about the techniques and technology of weightless defecation. For astronauts of the Apollo period, it was a nightmare of awkwardness, embarrassment, and fouling one’s own nest. The great surprise is how little it has improved. There is some evidence that astronauts have regulated their food intake to limit the necessity of excreting waste. It is hard to imagine a more arresting contrast between the wonders of high technology and the realities of human physiology.

Less well known but equally challenging are the limits of habitability. How much space does a human need to exist comfortably for long periods of time? Five cubic meters, about twice the size of a telephone booth, is tolerable, Harrison says. Seventeen cubic meters is optimal for flights of six months or more. “Low levels of habitability,” he writes, “wear people down.” Weightlessness complicates the habitability question because humans also prefer an optimal distance when interacting with one another. One meter of separation appears to be a reasonable norm for conversation, though some cultures prefer more, some less. Furthermore, studies have shown that people want more distance if they are not oriented normally to their interlocutor; speaking to someone floating upside down calls for different spacing.

One of most surprising aspects of habitability onboard the International Space Station is noise. The spacecraft appears to glide silently through the empty void, but in fact the life support and other mechanisms aboard the station drive sound levels well above the 35 decibels recommended for sleeping areas and to 55 decibels in work spaces. One of the earliest flights to the first space station module brought duct tape and other sound-suppressing materials to try to get background noise under control. Everyday technologies for controlling sound, such as increasing the density of walls or transferring the sound outside the enclosed environment, are impractical in space. Even normal sound absorbers, such as foams, have liabilities in space because they are flammable or emit noxious gases. Other technological solutions are being developed, but noise reveals how difficult the simplest of problems can be in space.

The bad news about controlling odor in space is that Harrison’s ideal for personal hygiene is full body cleansing and a change of clothes twice a week. The good news, he reports, is that humans quickly adapt to high concentrations of odors. Harrison’s conclusion on habitability punctures some of the romanticism of human spaceflight: “Arguments that no inconvenience is too great if the reward is the wonders of space, or that all activities are glamorous when they are undertaken in orbit, are based on wishful thinking,” he writes.

Harrison says NASA has particularly neglected two dimensions of the human equation in space. The most important is social psychology. He believes that an “antipsychological bias . . . is characteristic of NASA.” The agency’s reluctance to engage the consequences of long-duration confinement, discomfort, inconvenience, and danger affects every aspect of the manned spaceflight program, from astronaut selection to plans for long-range flights to Mars and beyond. It also forces Harrison and other students of human spaceflight to examine analogous experience, because NASA has neither studied the problem thoroughly nor compiled the data that one would expect after four decades of human presence in space. Among the psychological problems encountered in space and analogous environments are reduced efficiency of mental processes, hypochondria, sleep disorders (partially from the disruption of circadian rhythms brought on by 90-minute days in Earth orbit), and the unexpected “third quarter phenomenon.” No matter how long the mission, be it four days or four months, emotional stress and disruptive behavior seem to peak in the third quarter of the mission. Obviously such phenomena call for further study, but Harrison believes that NASA is in “denial” about the problem and has actually covered up unpleasant psychological problems on previous spaceflights.

The other area in which NASA has stuck its head in the sand is sex in space. The agency appears to have a “don’t ask, don’t tell” policy that leaves this realm a virtual terra incognita. Perhaps little is to be gained by studying the problem, let alone making policy, for short-duration flights. But as mixed crews increasingly spend months in space and contemplate years-long future voyages, the topic will demand attention. Still, the long catalog of obstacles to long-duration manned spaceflight deters not Harrison. Though he devotes two-thirds of his study to itemizing these problems, he nonetheless concludes that there are no showstoppers–no obstacles that might preclude missions to Mars and beyond.

While failing to explain how or when some of these obstacles will be overcome, Harrison presses on to the prospects for space settlements and interstellar migration. Here the author’s ambivalence about humanity’s future in space reveals itself more clearly. Confident that humans will one day inhabit the heavens and anxious to speed that accomplishment, the author nonetheless knows that existing technology is inadequate to the task. Nor does any breakthrough hover on the horizon. It is physically possible to achieve a manned Mars landing now; it is surely possible to return humans to the Moon. But Harrison entertains no illusions that these missions will be launched any time soon.

So he simply presents the works of others, neither endorsing nor refuting their claims that space colonization and migration are or soon could be practical. Harrison has immersed himself in this literature, and he seems to embrace its optimism, if not its predictions. He asserts, without evidence, that “space exploration is an intrinsically human activity,” that “space exploration fuels people’s interest in science, technology, and nature,” and that NASA’s education programs “sensitize students to the importance and value of space exploration.” He even goes so far as to repeat one of the utopian visions of early advocates of atmospheric flight, suggesting that spacefarers will leave conflict and war behind them on Earth, experiencing “social renewal” in space.

Occupying a middle ground between these utopian visions of some distant future and the reality of human spaceflight as we have experienced it in the past 40 years is the suddenly topical realm of space tourism. The five-day, $20-million sojourn of Dennis Tito aboard the International Space Station has raised the prospect of a self-sustaining commercial enterprise. Tito has vowed to pressure NASA into accepting more tourists, and NASA appears to be equivocating. One company already envisions hotels in low-Earth orbit by 2010, and the Japanese Rocket Society projects daylong orbital tours for 50,000 people a year. But those inclined to make their reservations now should be chastened by the experience of the thousands of enthusiasts who in the 1960s made deposits for space junkets that have yet to materialize. Tito’s experience notwithstanding, there is no existing technology that offers a viable economic model for space tourism, nor is any in sight.

Despite his optimism and enthusiasm, Harrison understands that reality. “The key to all human endeavors in space,” he reports, “is developing low-cost methods for getting there.” Only when that problem is solved will the two parts of his story be joined. Only then will we know whether the hard-earned experience of the past 40 years will turn out to be a stumbling block or a stepping-stone.

Human spaceflight to date may be analogous to the voyages of Columbus. Or it may be analogous to the voyages of Leif Ericksson, sterile dead ends that had to await the development of more robust technologies. This book makes clear how far our understanding and our technology have to go and how wide is the gap between our current capabilities and our visions of the future. The reader takes away but little confidence that we are closing the gap, or even addressing it. 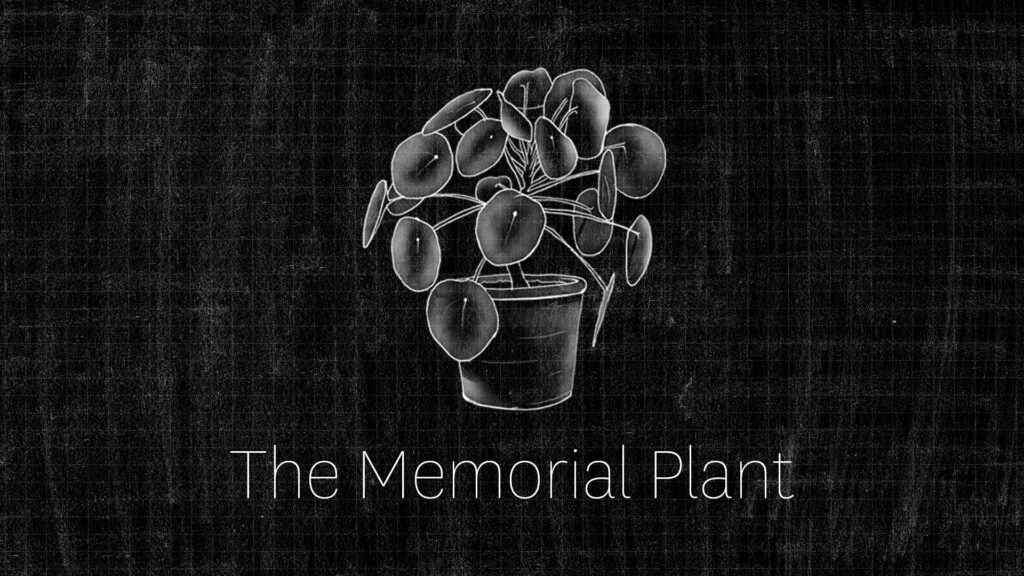 VISION: Creating living memorials for communities on Mars by encoding the DNA of plants with the memories of loved ones. TEAM: Bronwyn Hallis, Amanda Han, Charles YunckenSCHOOL: University… Read More 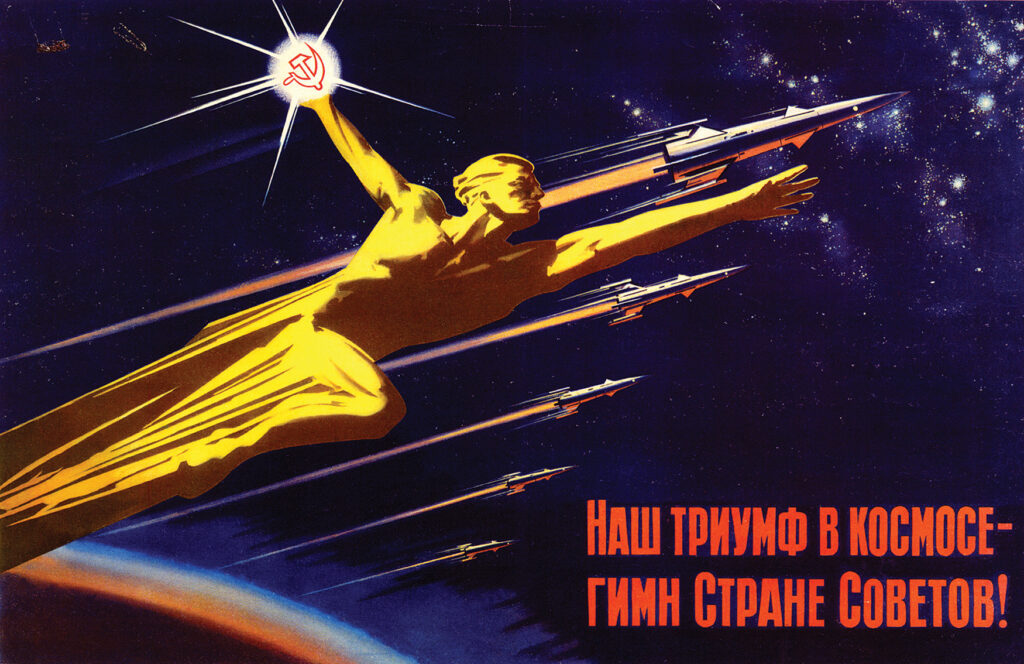 Space iconography was a persuasive communications tool throughout the space race. Posters played an important role, especially at a time before ubiquitous home televisions, personal computers, and smartphones.