Pillar of Sand: Can the Irrigation Miracle Last?

The most capital-heavy and, in a sense, fundamental technology behind the extraordinary productivity of modern farming is irrigation. So ancient as to be paired with the emergence of the first cities and civilization itself 6,000 years ago, it is more important than ever now, when 40 percent of the world’s harvest is grown under irrigation on only 17 percent of the cultivated land. The spread of irrigated agriculture in its two modern surges forward (from about 1800 for surface dams and canals, and from about 1950 for wells and groundwater pumps) is one of the central reasons why world population recently was able to top 6 billion. To feed a still-growing number of humans, our reliance on irrigation may well have to increase even further; although as the noted environmentalist and water writer Sandra Postel makes clear in Pillar of Sand, it is not in the least a sure thing or a straightforward prospect. 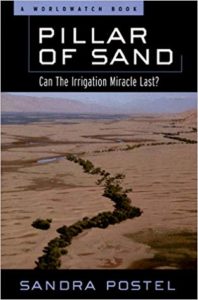 In a gracefully written wakeup call, Postel tells us that irrigated agriculture can be a Faustian bargain. She discusses numerous adverse factors at work in widely separated but populous parts of the world and adds a new one: the vulnerability of irrigation systems to a warming climate.

Postel directs the Global Water Policy Project in Amherst, Massachusetts, and is a senior fellow of the Worldwatch Institute, under whose auspices this book and her Last Oasis: Facing Water Scarcity of 1992 were published. Last Oasis was reissued in 1997 and was the basis for a PBS documentary that year. Pillar of Sand often has the anxious, foreboding tone of other Worldwatch publications, characterized by worries about the pressures of a still-growing and ever-more-consuming world population on natural resources. But those concerns are not figments of the imagination, nor is Postel out of step with many of her fellow professional water specialists. In its presentation, Pillar of Sand is a high-level popularization of a serious subject; in its content, it is an alarm signal.

With the capacities of rangelands and ocean fisheries overtaxed, the best bet for increased food production continues to be gains in cropland productivity. But the extraordinary post-World War II annual increases of 2 percent per acre have slowed to 1 percent in the past decade, and acreage expansion has essentially reached its limit, Postel believes. The best way to grow a better crop or an additional crop or even two crops each year has been to irrigate. But three barriers hinder the expansion or intensification of irrigation: 1) quantitative limits on how much water a given river basin produces in a year; 2) salting of the soil, a consequence of irrigation that progressively cuts yields and often must be dealt with by field flushing and drainage installations, which can be as expensive as building the irrigation capacity itself; and 3) perhaps the most dangerous trend, quantitative and qualitative deterioration of aquifers supplying groundwater, which for years have been overpumped in dry and populous parts of the world such as northern China, western India, the Middle East, California, and the Great Plains states of the United States.

Postel traces the rise and fall of irrigation-based societies, beginning 6,000 years ago in the Fertile Crescent (now Iraq), where the problem of salination first emerges. Irrigated water either brings to the topsoil or draws up from the subsoil salts that accumulate in the root zones of plants when crop water evaporates or transpires through plants in the growth process. Among the early civilizations, Egypt alone used an irrigation system that proved to be sustainable in the long term, though for 6 million people, not its current 80 million.

Postel skips a long intervening history of irrigation in Asia (compare Francesca Bray’s The Rice Economies) and comes quickly to the modern world. In 1800, only 8 million hectares of land were under irrigation; today, 240 million are. But with a few exceptions in China and elsewhere, including the controversial Three Gorges Dam project on the Yangtse (for which irrigation is only one goal, along with flood control and hydropower), Postel believes that the day of big surface projects has ended. The best physical situations for “developing” water were exploited first, and the cost of irrigating is rising worldwide, while low agricultural prices reduce the capital available for these heavy investments. Although the Egyptian government wants to irrigate still more desert land, the Nile exemplifies the quantitative limits of surface water. The Nile’s annual yield is already divided by treaty between Egypt and Sudan, but upper riparian Ethiopia, emerging from decades of turmoil, is likely to begin developing Nile source water to irrigate its own crops. This means less water for Egypt and Sudan, which may lead to political conflict.

Surface irrigation systems are running up against lack of water in many regions besides Egypt, but their pervasive problem is still salination and the heavy second wave of investment required to flush and drain the fields, which is harder to mobilize than the first construction. Salination now adversely affects about a fifth of the world’s irrigated acreage, Postel writes, and existing irrigation systems commonly suffer from deficits in general maintenance and follow-up spending for desalination.

The mass diffusion of wells and motorized pumps to reach underground aquifers has taken place only in recent decades. Groundwater contributed massively to a leap from 100 million irrigated hectares in 1950 to 250 million today. Groundwater can be extracted on almost any scale, from the bamboo starter well pumped by foot that is sold in developing countries to the large centrifugal pumps used in the U.S. Great Plains.

Groundwater pumping in several important dry areas is now far exceeding replenishment rates. Overpumping progressively lowers the water table and forces the use of deeper wells and bigger pumps. This requires more capital–a major disadvantage for poor farmers. Throughout the world, Postel calculates, farmers are overdrawing water by 160 billion cubic meters per year. Thus, the roughly 10 percent of world grain production that depends on this water is unsustainable. The United States is not exempt from this “tragedy of the commons” problem, which is particularly affecting the Great Plains’ Ogallala aquifer and California’s Central Valley. Some areas, such as the Middle East, must import food because the lack of water limits agricultural production. As the University of London’s Tony Allen points out, this amounts to importing water.

Irrigated agriculture is also in competition with urban water use. This is perhaps less problematic than it may seem, because although cities are growing and reallocating water to them must be done with skill, urban needs can be met with a small fraction of the water consumed by farming. In Last Oasis, Postel reported that reducing irrigation needs by a tenth would free up enough water to roughly double domestic water use worldwide. City dwellers can afford to pay much more for a cubic meter of water than irrigators do, and water is many times more economically productive and job-generating in industry than in agriculture. Also in competition with irrigation are the claims of recreational water users and the pressing need to retain enough water in streams and wetlands to preserve riverine ecosystems. Postel discusses these water conflicts with expertise.

Will climate change affect irrigation and, more broadly, world food security? A warming climate is expected to intensify the hydrological cycle, which means more rapid evaporation of water from fields. Precipitation will likely come more often as rain, and less as snow, which will reduce the valuable storage function of mountain snow packs for rich farming valleys. Droughts may become more frequent. Postel makes the valid point that although we cannot predict in detail how irrigated farming in a particular basin will be affected by global warming, a changing climate will throw a monkey wrench into current project planning habits, which are based simply and directly on past and present circumstances. Adjustments of existing and future systems, she notes, are likely to be expensive.

Postel is not saying that a food crisis is inevitable, although in her preface she is pessimistic: “So far, our degree of response to the challenge pales in comparison to its scale. With the lives and livelihoods of hundreds of millions of people at stake, not to mention the health and functioning of our aquatic environment, there is little time to waste in crafting a more productive and sustainable form of irrigated agriculture–one that can last for centuries.” She believes that this effort will require reshaping many facets of society, from individual consumption patterns to national economic activities and regional politics.

This view is not an isolated one among other water researchers. Other observers, however, see her perspective as detached from the daily working realities of providing water to people and farms. They believe, for example, that productivity gains can still be made in nonirrigated agriculture and by adding lighter, supplemental watering arrangements to crops that are primarily rain-fed. They point out that advances in plant genetics should increase food productivity and that local food crises can now be relieved by international trade in food grains. They also believe that charging fees for access to water will provide incentives to conserve the resource, although the transition will undoubtedly have a harsh side. And they assert that close managerial attention to water demand as well as its supply will lead to more rational use, thus saving large amounts of water for new needs. As Pillar of Sand makes clear, water problems do not really exist at the world level but at a great variety of regional and local levels. Many problematic situations exist, notably in the Middle East. But because water imbalances and their remedies are local and regional, the irrigation issue lacks the scope and also the intractability of the authentically global issue of climate change. That does not mean, however, that it does not deserve global attention.