An -ology of technology

The Nature of Technology: What It Is and How It Evolves

Postmillenial debate on the appropriate human uses of technology is still framed by the struggle between technophiles, who never met a technology they didn’t like, and Luddites, who manage to believe simultaneously that nature is on her last legs at the hands of technology and that she will have her revenge on us in the end. 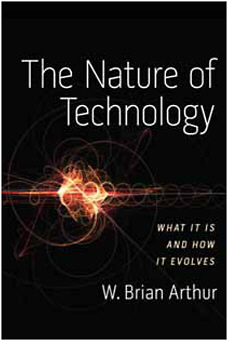 Brian Arthur is a technophile’s technophile, an accomplished interdisciplinary scientist with degrees in, among other things, electrical engineering, operations research, math, and economics. He is well regarded for his work on the economic theory of increasing returns, which examines how small occurrences (such as the famous example of how the slightly longer capacity of VHS tapes enabled them to triumph over Betamax tapes in the dawn of the consumer videotape industry) can be magnified by positive feedback into large differences; and as one of the fathers of complexity theory, which argues for the desirability of studying complex systems in order to discover “emergent properties,” even if the discipline has come up with little in the way of tools for doing so. He has a strong relationship with the technophile world through his affiliations with Stanford University, the Palo Alto Research Center (PARC), and the mountain fortress of technophilia, the Santa Fe Institute. As John Seely Brown of PARC fame says on the cover of the book, “Hundreds of millions dollars slosh around Silicon Valley every day based on Brian Arthur’s ideas.”

For Arthur, there are three basic principles of what he calls the “combinatorial evolution” of technologies:

IS THERE AN UNDERLYING UNITY TO THE APPARENTLY BEWILDERING VARIETY OF TECHNOLOGIES? HOW DO EXISTING TECHNOLOGIES GIVE RISE TO NEW ONES? IS THERE A MECHANSIM FOR EXPLAINING THE ORIGIN OF UTTERLY NOVEL TECHNOLOGIES?

The first point provides a mechanism for deriving new technologies from existing ones. Starting from a mythical state of nature where humankind invented technologies such as sharp tools and fire from little but natural phenomena, a world increasingly dominated by technologies themselves has emerged, reflecting the generative power of using existing technologies to bootstrap new ones.

The last point, that technologies harness an effect or phenomenon, connects technologies to “nature,” since these phenemona are, for most technologies, natural. Jet-engine technology (an example used throughout the book) harnesses, among other things, Newton’s Third Law and the Bernoulli Effect.

The second point, although it fascinates Arthur and leads him to dwell on the “recursive,” “fractal,” and “autopoietic” properties of technology, adds little to the argument.

Chapters 5 and 6 are my favorites. They take deep dives into what “standard engineering,” the everyday design problems that an engineer faces, has in common with profound innovation in technology and highlight a common thread: “A new project always poses a new problem. And the overall response—the finished project—is always a solution: the idea, a specific one, of an appropriate combination of assemblies that will carry out the given task … Because the overall solution must meet new conditions, its chosen assemblies at each level will need to be rethought—and redesigned to conform.”

A profound innovation works in exactly the same way but entails new phenomena or new uses of known phenomena: “At one end of the chain is the need or purpose to be fulfilled; at the other is the base effect that will be harnessed to meet it. Linking the two is the overall solution, the new principle, or concept of the effect used to accomplish that purpose. But getting the principle to work properly raises challenges, and these call for their own means of solution, usually in the form of the systems or assemblies that make the solution possible.”

There is much more. Arthur has some interesting thoughts about “domains” or systems of technologies, such as digital, electronic, or photonic. He has a nice phrase for domains as “worlds entered for what can be accomplished there.” He has some thoughts about the economy not simply as a container for its technology but as an evolving entity that reacts back with its technologies and changes itself over time. Stimulating ideas such as these are a good reason to read this book.

Ultimately, though, the whole edifice is not entirely satisfying. For one thing, the scholarship could have been stronger. Surely some economists besides Schumpeter have written about technology. Both Adam Smith and Karl Marx have had plenty to say about technology and the economy, but Arthur barely mentions them. Similarly, many relevant philosophers are curiously absent. Arthur discusses Heidegger a bit (and appropriately so), but Popper, for example, is nowhere to be found, or Foucault for that matter (although perhaps Arthur is to be forgiven for that). This wouldn’t be a shortcoming—after all, Arthur says “[t]his book is also not a review of the literature on technology”—if it didn’t have the effect of hiding “prior art” in these matters. Marx’s notion of the productive forces and his treatment of them prefigures Arthur’s by more than a century. There is a bit of old wine in new bottles here.

But lack of scholarship is a small blemish compared to the seeming unproductiveness of the results. The ultimate power and test of a theory are the predictions it affords and the countertheories it falsifies. Darwin’s theory opened up a whole new territory for biology by adducing a simple and profound mechanism whereby species could evolve from other species, thereby falsifying the theory that each species was unique. Did anyone before The Nature of Technology seriously doubt that technologies arise from other technologies and ultimately from the harnessing of natural phenomena?

Of course there is a virtue in saying it all in one place in the structure of an orderly argument, and Arthur is to be commended for this. But what predictive power becomes available to us as a result of this work?

Arthur does not ignore or shrink from this challenge and discusses a simulation he and Wolfgang Polak built to explore the “evolution” of more complex logic circuits from simpler ones. The simulation is a standard kind of genetic algorithm that embodies some of Arthur’s thinking about the evolution of new technologies, and Arthur says excitedly: “In the beginning there was only the NAND technology [a very simple form of logic gate]. But after a few tens and hundreds of combination steps, logic circuits that fulfilled simple needs started to appear … [A]fter sufficient time, the system evolved quite complicated circuits: an 8-way-XOR, 8-way AND, 4-bit Equals … In several of the runs the system evolved an 8-bit adder, the basis of a simple calculator.”

This kind of “proof by simulation” has a modest history in “the -ology of technology.” Stanley Miller in the 1950s put together a few organic chemicals and passed a spark through them for days: Out came amino acids. John Conway in the 1970s put together a few “cellular-automaton” rules and a nifty visual display and ran his software for a few days: Out came “self-replicating patterns.” Doug Lenat in the 1980s put a few “general rules of inference” into Eurisko and ran it for a while: Out came the “discovery” of prime numbers. Sadly, these simulations prove little except that “if you put good precursors into a simulator you can get outputs that please you and sometimes things go well.” The Arthur-Polak simulator, like these others, gives intimations of higher structures emerging from lower, but in fact things do not progress beyond the first encouraging results. Lenat’s theorem prover “discovered” prime numbers but never got much further. Miller’s spark tubes produced amino acids but not much else. I would guess that Arthur’s and Polak’s program didn’t go much beyond 8-bit adders.

Why are some geographies or eras more favorable to technology innovation and some less? Are there inhibitory forces that retard the acceleration of technology, or are things just going to move faster and faster until we pass through something like Ray Kurzweil’s “singularity,” where we simultaneously discover immortality, download our bodies into arbitrary hardware, and cope with artificial intelligences much more capable than ourselves? Is automatic evolution of technology in fact possible? These are some questions that a theory of technology should answer, and although Arthur recognizes that they are appropriate questions, his theory does not help us much with predictions.

Perhaps Arthur is too much of a technophile to do what Marx did and look not just at the “forces of production” but also at the “relations of production”: the combination of class struggle, clashing of economic interests, politics, psychology, and pure human orneriness that, for Marx, defined how innovation would develop as much as or more than the autopoietic inner play of technology. Relations of production tell us that new anti-aging creams will undergo more frenzied evolution than cheap mosquito nets, that hems will rise and fall in order to keep selling skirts, and that food will rot in one corner of the globe while people go hungry in another. Surely it is in the intersection of these political, social, and cultural factors with the elegant structures of technology that a better theory of how we make what we make—and why we don’t sometimes—would be found.