Drug use and Control

Forces of Habit: Drugs and the Making of the Modern World 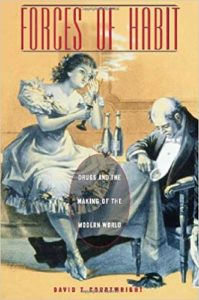 Forces of Habit offers an ambitious interpretation of a challenging topic: the evolution of drug use and drug policy through time and across continents. Happily, it does this with no axe to grind. Most books in this genre that transcend the purely descriptive adopt a sensationalistic muckraking tone untroubled by coherence, let alone analysis. The implicit logic seems to be, “If we could put a man on the Moon, surely we should be able to eradicate drugs. We haven’t, ergo some person or agency must be corrupt or incompetent, or perhaps is part of a conspiracy to exploit the poor, gain political power, or otherwise act in elite rather than common interests.”

In refreshing contrast, David Courtwright has produced a serious book about a serious topic, and it is a fun read to boot. His explanation of how we got to where we are with drugs succeeds in large measure by focusing on the commonalities across different substances. The central insight of this book is that when viewed from a broad perspective, most psychoactive substances have similar histories. Indeed, it is where each substance has come out at the crossroads of history that has largely determined whether it is subject to harsh prohibition or counted as an item of routine commerce. Courtwright does not force this conclusion on the reader but rather allows the insight to bubble up from the evidence presented.

Part one of the book is devoted to a discussion of particular substances. The histories of the “big three” (alcohol, tobacco, and caffeine) and the “little three” (opium, cannabis, and coca) are discussed in turn. The material in these chapters can be found elsewhere but is well told here. Alcohol may have been around for millennia, but distilled spirits are more recent and more problematic. Lesson: Potency matters. Tobacco was initially resisted with draconian punishments, not only by James I of England but also by rulers in Russia, Turkey, and China. Yet tobacco triumphed over these obstacles. Lesson: Prohibition does not by itself eliminate use. Nor do brutal sanctions. European caffeine consumption exploded in the 18th century, with coffee consumption rising from 2 million to 120 million pounds, tea from 1 million to 40 million pounds, and cacao from 2 million to 13 million pounds. Lesson: Given the right supply conditions, use of new psychoactive substances can grow very rapidly.

The “little three” are little only in relative terms. Heroin and cannabis are clearly global commodities, and cocaine is arguably as well. In contrast, kava, betel, qat, and any of a number of other psychoactive substances are used only regionally. Why? Courtwright asks this intriguing and heretofore rarely discussed question and offers some reasonable speculations, ranging from the pedestrian (perishability) to the prejudicial (drugs associated with non-Christian religious rites were shunned).

Part two of the book addresses the role of these psychoactive substances in commerce. It is an appropriate focus because drugs are, after all, ultimately consumer goods. The basic thesis is that drugs, including tobacco, first appeared in western society as exotic medicines. Only later were they used by the masses for their psychoactive effects and simultaneously by businesses for profit and governments for tax revenues. The democratization of use was significantly correlated with declines in price. For example, a key ingredient in the early 18th century English gin epidemic was the low cost of gin. Courtwright likewise describes the efficiency of an absinthe factory and notes that advertising and mass production were the keys to absinthe’s 19th century surge in popularity.

The fact that a substance is cheap is a necessary but not sufficient condition for widespread use. This is an important social phenomenon. After all, many inexpensive substances are unimportant economically. Courtwright explains that cheap drugs are ultimately a social concern because they are also “a trap baited with pleasure.” These substances provide more short-term gratification per dollar than do most consumer goods, but they are a marketer’s dream in the sense that they are nondurable and compulsion-inducing, plus they often demand increasing doses to achieve the same effects. Furthermore, social customs provide powerful incentives for their use.

The ultimate expression of the efficient industrial production of drugs is the machine-rolled cigarette. The story of how James Buchanan Duke used the Bonsack cigarette rolling machine to produce inexpensive ready-made cigarettes and how his American (later British-American) Tobacco Company marketed them around the world is intriguing and important. The antics pursued to “brand” what would otherwise be indistinguishable types of cigarettes are likewise entertaining. One could argue that Courtwright’s decision to focus primarily on cigarettes in this portion of the book is misleading because they were the extreme example, not the prototypical story. With no other substance do we find a single company achieving such domination of an open market. However, as long as one remembers that cigarettes are the extreme example, having these points made in such stark relief is instructive.

The third and final part of the book is focused on drugs and power. Courtwright begins by describing how drugs have been used to palliate, control, and exploit labor, and how governments became addicted to tax revenues generated by these sales. Why then did governments do an about face and start to prohibit these drugs? To be sure, the United States played a singular role in the evolution of the global drug control regime. But Courtwright argues that more fundamentally it is not in the interests of any modern industrial state to have large proportions of its population addicted to powerful psychoactive substances. A drug-dependent manual laborer may be almost as productive as an abstinent one, and in some cases even more productive–at leat for a short time. But industrial economies are not well served by drug-dependent pilots, surgeons, and engineers. Furthermore, in a modern social welfare state, people have a greater selfish interest in the health of their fellow citizens than in the days when health and disability insurance were rare. Also, modern governments can efficiently raise revenue in a variety of ways besides excise taxes.

Why then were the big three not proscribed? Caffeine simply was not dangerous. Courtwright suggests that the key for alcohol and tobacco was the power of the industrial corporations producing those drugs and their popularity with the ruling elite and empowered classes. Also, for cigarettes in particular, use is not inconsistent with productivity and life in an industrial age. Driving while intoxicated is a major social problem. Driving while smoking is not.

Forks in the road

Looking across diverse psychoactive substances, two important forks emerge in the historical road of their development and resulted in three possible outcomes. The first fork determined whether the substance transcended its regional origins and became an item of global commerce. Opium did. Kava did not. The key determinant was whether the substance became important in the economies and societies of the western European colonial powers who dominated global commerce in the early modern era. (The partial exceptions are coffee and tea, for which there were other factors in addition to European influences for their spread beyond their regional origins.) What in turn determined whether a substance was adopted by the European powers is somewhat more idiosyncratic.

The second main fork in the historical road determined whether the substance was subject to tight regulation or prohibition in the 20th century. In western societies, the big three were not, except temporarily for alcohol. The little three were. Courtwright points out a spectrum of regulatory regimes ranging from completely free use (caffeine) to complete prohibition (heroin), with intermediate states such as free use to all adults (cigarettes), regulatory prescription (Valium), and availability for maintenance purposes (methadone). As drug policy scholar Mark Kleiman of the University of California at Los Angeles has lamented, in the United States most drugs are clustered at one end of this spectrum or the other, with few occupying the middle terrain. Society may indeed be better served by moving more substances toward such middle ground, but Courtwright’s analysis helps explain why it should not be surprising that at the dawn of the 21st century we find most drugs at one extreme or the other.

Popular drugs are not likely to be prohibited, and drugs to which there is comparatively free access are likely to be widely used both because of clever marketers and because the substances themselves combine the traits of providing great pleasure for little cost and the impetus to keep using them. Thus we begin to understand why the two substances responsible for the most deaths (alcohol and tobacco) are among those that are officially sanctioned. On the other hand, drugs that are used primarily by marginalized populations and that are not produced by large companies are vulnerable to strict control, because they do not have politically powerful defenders; once prohibited, they are less likely to be used widely. (The first-order consequences of prohibition such as high prices discouraging use most likely trump perverse second-order consequences such as the “forbidden fruits” effect.) Thus, in either direction we have a positive feedback loop. Popular drugs remain unrestricted and become widely used. Marginalized drugs are prohibited and become used primarily by people outside the mainstream by virtue of their age, economic class, or race.

One of the virtues of historical analysis is that it reminds us of what great changes can be seen when we look over generations and centuries, not just congressional terms, and it prepares us to anticipate such changes in the future. Courtwright is thus appropriately cautious about predicting what the landscape of drug use and control will look like in the future but concludes that: “One thing, however, is not likely to change. It is the political awareness of the dangers of exposing people to psychoactive substances for which, it is increasingly clear, they lack evolutionary preparation. Psychoactive technology, like military technology, has outstripped natural history. The question is what to do about it. The answer, whatever it may be, is not a return to a minimally regulated drug market. The movement toward restrictive categorizations was fundamentally progressive in nature. Like most reforms, it was partly motivated by self-interest, tainted by prejudice, and imperfect in its execution. But its basic premise was both correct and humane. The drive to maximize profit–individual, corporate, and state–underlay the explosive global increase in drug use. Checking that increase meant restricting commerce and profits, which meant regulatory laws and treaties. The task is now to adjust the system, eliminating the worst concomitants and plugging its most conspicuous gaps.”

Policy wonks looking for specific suggestions for adjusting the current system will find little in this book, but that is appropriate. This is a story about how we got to where we are, not how we should go forward, and an ad hoc list of policy prescriptions would be a poor coda to such a fine book. The themes of this book, although perhaps not timeless, are written in the sweep of generations and would be diluted, not enhanced, by a contemporary applied policy analysis, which necessarily must grapple with ambiguous evidence and respond to the exigencies of particular drugs, times, and jurisdictions.