How the End Begins: The Road to a Nuclear World War III

Ron Rosenbaum wants us to be worried. His book How the End Begins: The Road to a Nuclear World War III is intended as an urgent warning that the terrifying dangers of nuclear weapons did not disappear when the Cold War ended two decades ago. There are still many thousands of nuclear weapons in the world—about 95% of them in the U.S. and Russian arsenals—and thousands of them are constantly poised for launch within minutes. 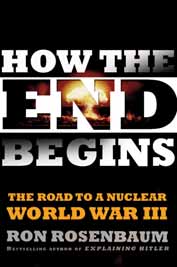 Rosenbaum dives deep into the many paths by which accidents, false warnings, and misperceptions could lead to a “world holocaust.” And he forces the reader to confront the deeply troubling moral implications of relying for our security on nuclear threats that, if carried out, would have the inevitable result of killing tens or hundreds of millions of innocent people. As Rosenbaum points out, that is a scale of slaughter beyond anything even Hitler ever imagined.

Unfortunately, Rosenbaum’s book is marred by mistakes, passages of pure speculation, and overheated rhetoric. Worse, he exaggerates some dangers, ignores others, and fails to explore some of the most promising pathways to reducing the dangers he describes.

The book opens with several pages of fevered speculation, centering on the October 2007 Israeli raid that destroyed a plutonium production reactor under construction in Syria. In Rosenbaum’s account, there is “little doubt” Russia detected the Israeli jets taking off (actually there is enormous doubt); Russia “may well have” warned Iran and “could easily” have made ambiguous nuclear threats to get Israel to back off; the Israelis “would likely have” relayed such threats to the United States; “and suddenly both nuclear superpowers . . . were on the verge” of being drawn into a nuclear war. This is all at some distance from reality. Syria’s action in building an illicit plutonium production reactor, North Korea’s decision to provide it, and the Israeli move to destroy it all raised troubling issues and dangers, but global thermonuclear war was not among them, contrary to Rosenbaum (and to an anonymous British official whose quote about the world at that moment being on the edge of “the bloody Book of Revelation” sets off Rosenbaum’s chain of imagining). It was quite possible, that night, that Syria might have chosen to strike back, but there was no serious chance that U.S. and Russian nuclear weapons would have been called into play.

The book’s weaknesses are unfortunate, because many of the nuclear dangers Rosenbaum wants us to focus on are very real, and despite outstanding efforts by many people, there are still crucial opportunities to address them that are not being seized.

Two decades after the end of the Cold War, it is simply insane that U.S. and Russian nuclear missiles remain poised for immediate launch, with military plans structured around launching within minutes of detecting an attack underway. Do we really want to rely on decisions made in a few minutes of terror to determine the fate of a significant fraction of the human species, when there is no longer a global struggle to the death (if there ever was) to justify such fearful risks? What if a completely convincing warning, coming from both radars and satellites, turns out to be a training tape, as occurred in 1980? What if the president is drunk or unbalanced at the crucial moment? (Rosenbaum devotes a chapter to a missile launch officer who dared to ask how he could confirm that the president was sane when he gave the launch order.)

Rosenbaum is correct in deploring President Obama’s decision, in his Nuclear Posture Review, to renege on his campaign promise to work with Russia to take nuclear weapons off quick-launch alert. The U.S. and Russian presidents both need to do this, as did President George H.W. Bush with a portion of the U.S. force in the early 1990s, as well as direct their militaries and technical experts to work out ways in which each side can be confident that the other has taken steps that would prevent it from being able to launch its missiles for hours or days (and has not secretly undone those steps later). This would be a major step in reducing nuclear dangers and in making nuclear weapons less relevant to the day-to-day conduct of international affairs.

Next, there is much to be done to shore up the global effort to stem the spread of nuclear weapons, in the face of challenges from North Korea, Iran, illicit nuclear technology networks, global terrorist groups, and more. The world needs stronger international nuclear inspections; better controls over black-market nuclear trade; strengthened security measures to keep nuclear weapons and materials out of terrorist hands; and, most important, steps to convince states they do not need nuclear weapons for their own security, including work to tamp down and ultimately resolve conflicts in South Asia, the Korean peninsula, the Middle East, and elsewhere.

Of course, past performance is no guarantee of future success, and North Korea and Iran in particular pose very serious proliferation dangers. But if we have the political will to undertake genuine political engagement and to offer incentives that convince these states that it is in their national interest to agree, it might still be possible to convince Iran not to build nuclear weapons and North Korea to dismantle or at least cap its small stockpile and avoid exporting it.

Rosenbaum, however, is so convinced that Iran is implacably bent on getting nuclear weapons, and so obsessed with large-scale nuclear war as the only danger to worry about, that he focuses on military strikes as the only way to address the Iranian program, and imagines that the only realistic option is nuclear strikes; an option virtually no one else is seriously discussing. (Rosenbaum seems to have missed the dramatic increases in the lethality of conventional weapons, which have made it possible for them to carry out many missions that once required nuclear weapons.) Rosenbaum touches on the dangers of war between India and Pakistan (the world’s most likely nuclear flashpoint) only briefly, with no proposals for risk reduction, and offers a similarly glancing treatment of North Korea.

Rosenbaum ends his book with a discussion of whether the number of nuclear weapons can ever realistically be reduced to zero. Here he seems genuinely torn, respecting those he interviews who are pushing for zero while also ridiculing the idea. He can only imagine zero after world government (possibly nuclear-armed) has been established and “a new human character” created. But men such as Henry Kissinger, George Schulz, Sam Nunn, and William Perry, along with two-thirds of the living secretaries of State and Defense, would not be pushing for zero if that is what it would take. There are many different visions of what zero might mean, some of which are an easier fit into the world as we know it. One could imagine, for example, a world in which there were zero assembled nuclear weapons, but some states still retained a small number of disassembled weapons under continuous international inspection and ready to be reassembled should anyone try to cheat on the arrangement. The barriers to such a world are large, but “an almost genetic deep change” of human nature would not be needed.

In any case, zero is a long way off, and we need to take steps now that will reduce near-term dangers and begin laying the foundation for more far-reaching actions. In the near term, it would make sense to focus, as Rosenbaum suggests (quoting proposals from Admiral Arleigh Burke, dating to the 1950s) on getting down to small numbers of highly survivable nuclear weapons. In the Fall 2009 Daedalus, Paul Doty, a participant in the Manhattan Project, offered a sensible target: reducing nuclear weapons to the point that they no longer have enough power to destroy civilization.

The events of recent years have made clear just how large the obstacles to such far-reaching change continue to be. After a prolonged struggle, the United States and Russia managed to reach agreement on the New START treaty that reduces nuclear weapons only very modestly, and the Obama administration only barely managed to convince the Senate to ratify it. The Nuclear Posture Review changed U.S. reliance on nuclear weapons only modestly, and Russia is, if anything, more reliant on them than ever. The nuclear programs in Iran and North Korea have become more dangerous every year, with little discernible progress toward stopping them. Pakistan is building up its nuclear stockpile at a furious pace, and India may be poised to follow suit. The U.S. Senate has refused to ratify the Comprehensive Test Ban Treaty, and the Conference on Disarmament remains unable to even begin negotiating a cutoff in the production of fissile materials for weapons. The International Atomic Energy Agency, the global nuclear watchdog, still has too little authority and funding, and too little political support to get much more. The nuclear security summit in Washington in April 2010 has built international support for action on improving nuclear security, but states are still refusing to agree to effective global standards that would cost money to implement, or to any form of independent review to confirm that they are fulfilling their security responsibilities.

In short, far-reaching steps to reduce nuclear dangers face huge obstacles. Rosenbaum has called out a warning, but he would have done an even greater service had he shown the way toward climbing these mountains and reaching a safer nuclear future.