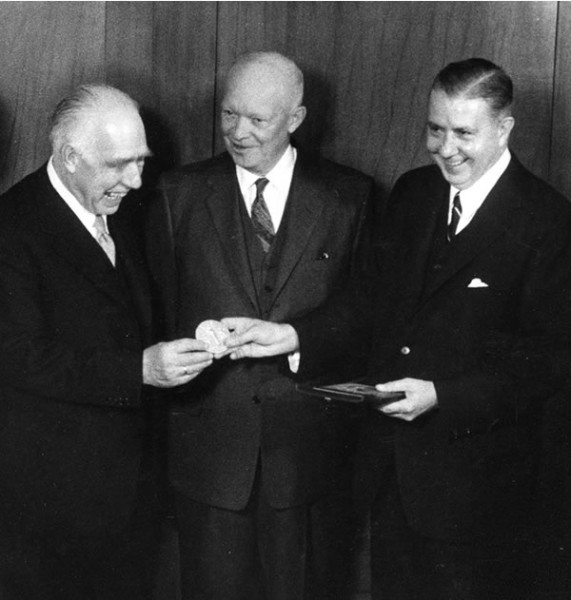 Neils Bohr, the Danish physicist who received the Nobel prize for his work on the structure of the atom, received the first Atoms for Peace Award on October 24, 1957 at the National Academy of Sciences in Washington, D.C. Bohr is on the left, with President Eisenhower in the middle, and Massachusetts Institute of Technology president James R. Killian on the right.

Bohr, who worked on the development of the atomic bomb at Los Alamos, became active in the campaign to stop the spread of nuclear weapons and to promote international cooperation in the control of nuclear technology.

The award was created by the Ford Motor Company in memory of Henry Ford and his son Edsel to honor individuals who advanced Eisenhower’s goal of promoting the peaceful use of nuclear technology. Killian was chairman of the award’s board of trustees.

The award’s significance was reflected by the stature of the program’s participants. President Eisenhower spoke briefly, followed by Henry Ford II and physicists John Archibald Wheeler of Princeton University and Arthur Holly Compton of Washington University.