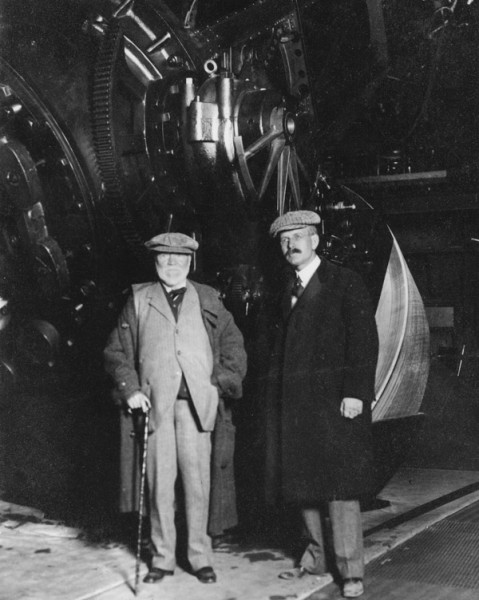 The Carnegie Institution of Washington was born a century ago in January 1902 with a $10 million gift from Andrew Carnegie to foster the development of new knowledge. It has supported research in a broad array of scientific fields, and its several observatories are among its most prominent investments.

The astronomer George Ellery Hale was one of the original advisors to the Carnegie Institution, and he was instrumental in convincing it to agree in 1904 to support construction of a telescope on Mount Wilson in the San Gabriel Mountains outside Pasadena. The photo above shows Carnegie and Hale beside the 60-inch telescope at Mount Wilson in 1910. Hale led the campaign for ever larger telescopes at the site, including the 100-inch Hooker telescope, which began operation in November 1917. This was the telescope that Edwin Hubble used to map the cosmos.

In 1915, Hale offered the services of the National Academy of Sciences to President Wilson to help with the war effort, and this led to the founding of the National Research Council. Hale was also instrumental in the construction of the NAS building, which was funded as part of a $5 million grant from the Carnegie Institution to the NRC.